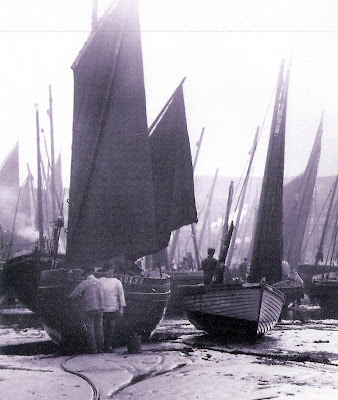 Despite their constrasting size both these boats shown here were classed as ‘Jumbos’ and are typical of the St.Ives shape which enabled the vessel to remain upright when taking the ground. Legs would have been torn off in a crowded harbour, as shown below. The one on the right (above) and those against the quay (below) are so similar to ‘Celeste’ they are almost certainly from William Paynters’ yard.

Photos reproduced by courtesy of The St.Ives Museum 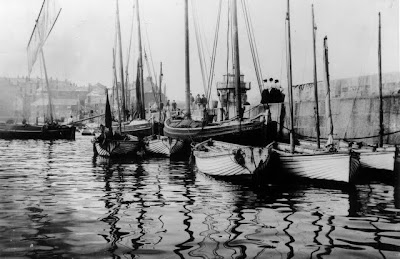 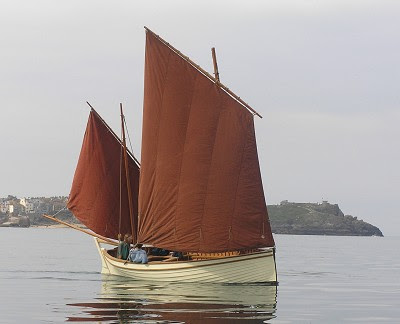 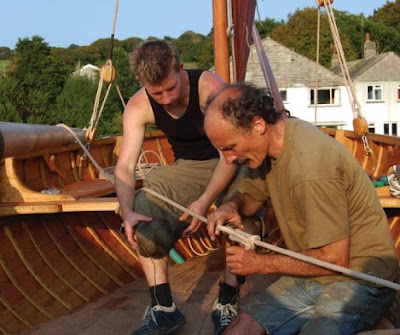 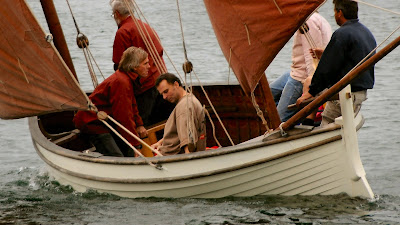 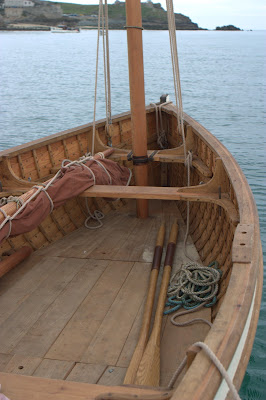 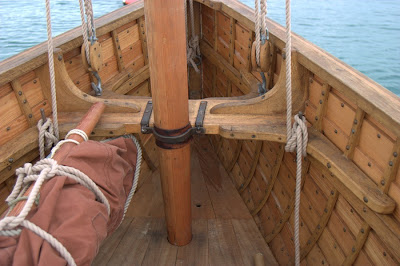 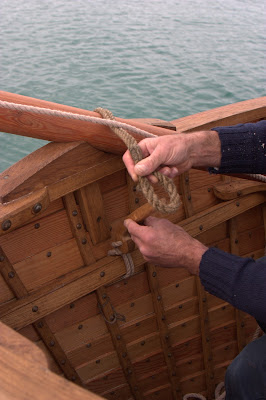 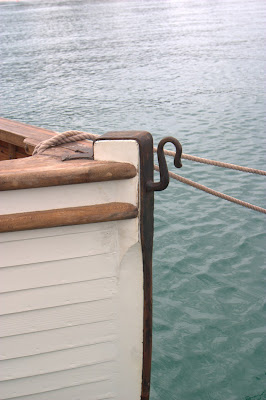 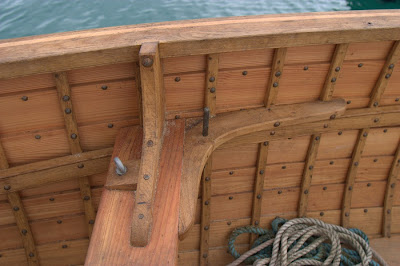 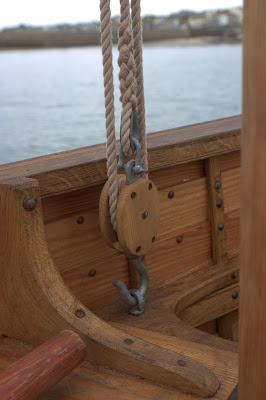 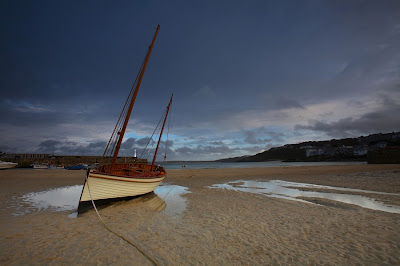 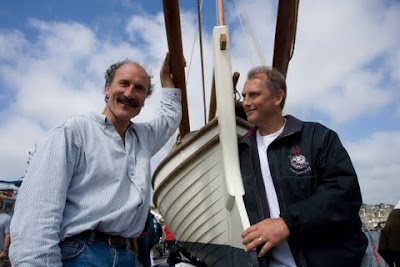 Jonny Nance with Pete Goss, a finisher in the ’96/’97 Vendee Globe. Pete’s latest adventure was the recreation of Mystery, a Cornish Lugger which carried 7 Cornishmen to Australia in 1854/55. Upon completion of the boat, Pete and crew sailed the Mount’s Bay Lugger in a recreation of the voyage. The new boat and venture was called Spirit of Mystery. I believe the occasion of this photo is Pete’s purchase of a ‘share‘ of/for the building of the new Jumbo. 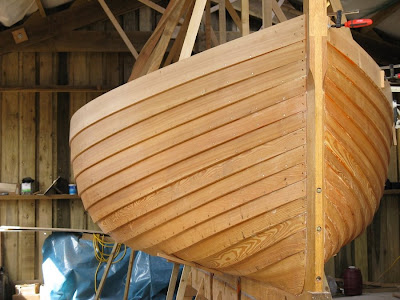 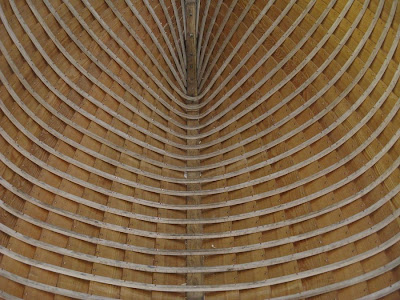 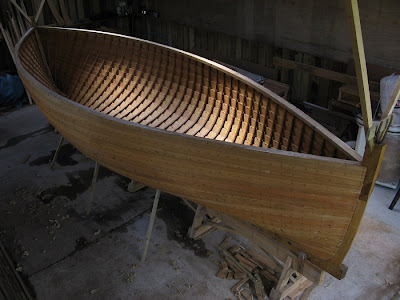 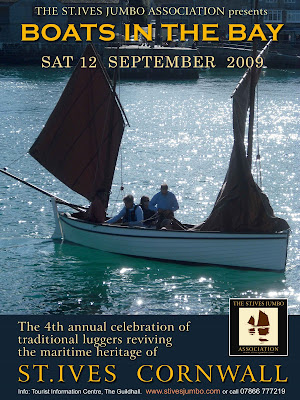 Jonny Nance is an apostle for traditional boats and boatbuilding, and community involvement in these areas, in his native St. Ives, Cornwall,UK. He’s created something called The St. Ives Jumbo Association to further these aims. And is doing a great job, as you can see at the Association’s website. Celeste is his first replica and another is nearing completion. I was struck by the craftsmanship and attention to detail when first seeing the photos on the website, and paid closer attention to what was going on here, and my attention has been amply rewarded. This seems a model project.
Jumbo’s were a late development in the local fisheries, a scaled down version of the larger mackerel luggers. The name arose in this way:
“To fishermen familiar with the much larger and more numerous mackerel boats the new Jumbos would have seemed particularly diminutive and so were ironically nick-named after London Zoos’ famous African elephant – the biggest creature in captivity.

Jumbo had caused a storm of protest in 1882 following its controversial sale to the Barnum & Bailey Circus in the USA. “

It’s Jonny’s intention to race the two boats as a way of getting the community interested and involved in the skills needed to preserve and continue their local heritage. But for me he has a more interesting goal. Jonny see’s the revival of these inshore fishing craft as a means of protecting local fisheries and promoting sustainable fishing, eco fishing, if you will, via a return to fishing under sail. In his words-

“When sailing the Jumbo you can readily appreciate why the lug rig remained popular for small fishing boats through to the last days of sail. To start with you’ve a wonderfully clear working area with the masts out of the way, and no boom to duck under. Even when close-hauled the sail and sheets are clear of the work area. This, combined with he manageable scale of the boat and rig makes the Jumbo an ideal model on which to develop skills and explore the potential of fishing for a living – under sail.

Our aim is to establish a racing class of these boats at St.Ives in order to regenerate a waterfront community in decline. How much more effective it would be if, in addition, these boats could be eventually used for the purpose for which they were designed whilst providing a seasonal income for a couple of individuals!

Clearly, there may come a time when, in addition to any green, carbon neutral credentials, a sail-operated fishery could become commercially viable or at least a natural way of conserving resources (as demonstrated by the Falmouth oyster fishery -much celebrated as the last in the world to be worked under sail). In the meantime the skills required need to be developed.

There’s a growing recognition that this approach would at least address some serious issues; the sustainability of fish stocks, the rising cost of fuel, the dependence on imported goods and the lack of employment opportunities in rural areas to name a few.

And if successful, the model could be readily repeated elsewhere.

Only a few months ago such a proposal would have been dismissed as romantic fantasy. So far however, my inquiries have been met with a degree of excitement .

Stephen Perham, the Harbour Master of Clovelly, who has been working the herring season there for decades, explained he has been thinking of reviving the ‘picarooner’ (their Jumbo equivalent) for the purpose. It’s no coincidence that a replica of this particular craft is currently under construction by students on the Traditional Boatbuilding Course at Falmouth Marine School.

Nathan De Rozarieux, the Project Director of Seafood Cornwall reckons there’s sufficient public awareness to support a significant premium for ‘zero-carbon’ fish when sold direct to the customer. This would ensure a market for the smallest catches. This view is shared by Matthew Stevens MD of Matthew Stevens and Son, the regions leading supplier of fish and seafood based in St.Ives,who said,

“Clearly the time is right for an initiative like this. We look forward to receiving their first catch!”

Even the authorities are supportive. The Marine Fisheries Agency at Newlyn inform me that obstructive legislation has been amended to allow unlicenced (unpowered) vessels of under 10m. to land and sell fish.

Without realising it individuals from each of the contributing sectors: boatbuilders, part-time fishermen, fishing authorities, and marketting have been quietly thinking along parallel lines but as yet have not joined forces.

We are on the threshold of a revival that could see several small, inshore and engineless fleets springing up around our shores over the next decade.

The logical place to start is where we left off – and engines took over.

Sceptical? Of course – but just think where the organic industry was only 30 years ago!”

Apparently the British House of Commons is taking notice of such ideas. Other institutions are taking notice of Jonny and the Association’s initiatives as well. The esteemed Tate Gallery held a fundraiser last spring to help make possible the completion of the second Jumbo.

Even an American group of descendants of the Cornwall Nance’s is taking notice and appealing for help. If you can do so, please!