Special thanks to reader Mark Peaty who made these brilliant 3-D renderings of SCAMP. His letter is below. —Eds

That was cruel of you teasing us with the SCAMP article, in the latest issue, but not having the plans available yet. The thought that this might be the boat I had been looking for kept nagging at me. I finally had to get “to work” on it by modeling it in 3D. Attached is a PowerPoint show that has an animation and several renderings of the model. I’ve sent it along so that you could share it with John Welsford and if so desired you could put it on the blog to temporarily appease others that are looking forward to building SCAMP.

The model does not include any of the small bits and pieces like cleats, halyards, ropes, etc. I was going for a conceptual look that I could use to help visualize with and not a photo realistic model for rendering purposes. I simplified the front of the cabin on deck to allow water to drain easily and added two rails along the benches for the rowing seat. Most everything else is taken directly off the sketch page in the magazine.

The model has some of the pieces in place with actual thickness of material, other pieces I still need to put more work into. It does allow for on-screen checking of dimensions to +/- 1/2″. I could put a couple more views together with approximate dimensions if that would be helpful.

When I finish a couple of other actual projects I hope to get started on building SCAMP. My model indicates that SCAMP will have a roomier cockpit than the Venture 17 I used to have and I know it will be a lot more stable than the Styrofoam Snark I used to have. It will also fit into the back of my pickup truck which saves me the hassle of dealing with a trailer.

I hope you enjoy looking at the pics. 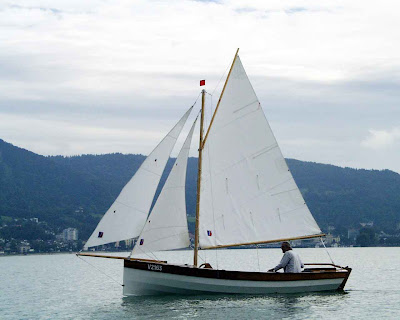 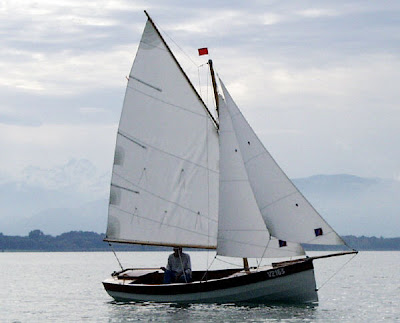 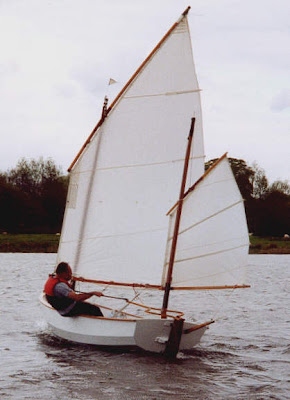 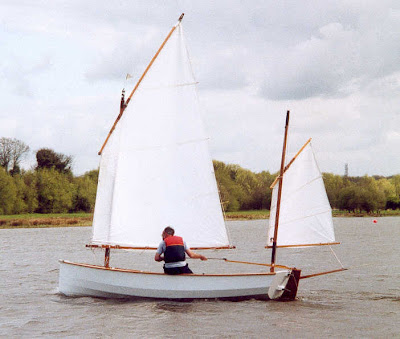 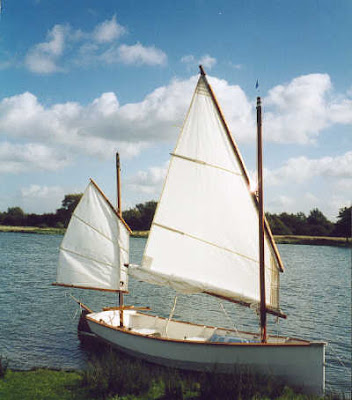 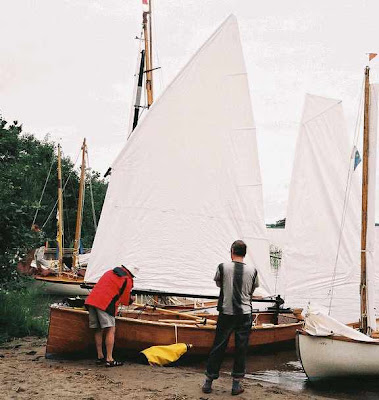 Peter Lord’s 5 plank Apple ‘Vips‘ with modified interior and his own carbon fibre spars and sail plan,
courtesy of Wojtek Baginski taken during the Raid Finland 2007 when he crewed for Peter Lord 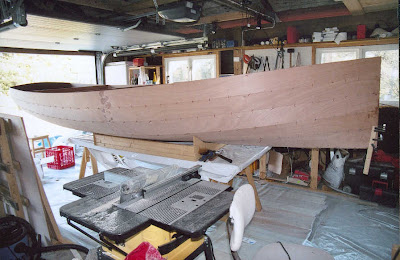 Stitched and ready for glassing – Peter Lord’s most impressive 5 plank Apple lugger with his own customized internal layout and rig. This hull is one of a number of variations based on the original 4 planker, including one with greater flare to the topsides and 3 inches more beam 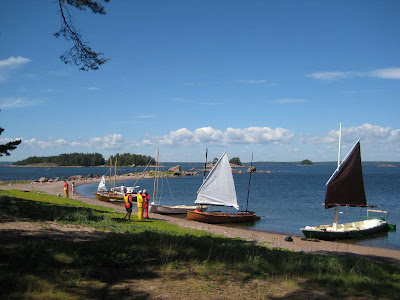 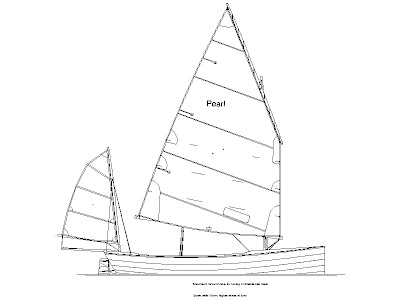 ‘Pearl 16, a day sailer or beach cruiser, half-decked, with multichine stitch and tape or glued clinker-over-stringers construction. The hull is of 6mm ply, the deck and cockpit of 5 or 6mm, with centre-board and dagger-board options. The cockpit has various permutations, from deep and open, to reduced volume, through to self-draining, but all with built-in buoyancy. Pearl, with either a lug main and mizzen, gunter yawl or gaff cutter rig, is beamier, flatter floored, fuller transomed than Apple, with lead and water or water ballast.‘ 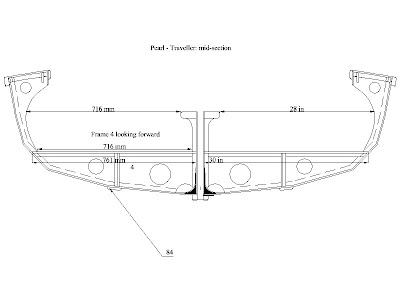 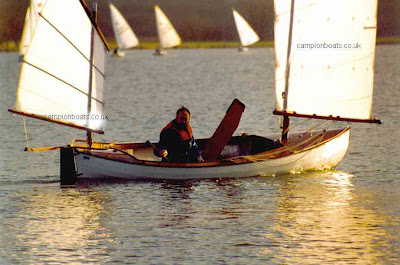 ‘George Holmes’ design the ‘Ethel’ of 1888 was digitised then stretched by Selway Fisher – who then drew up their own stitch-and-glue strake pattern for the hull, which I used when constructing the first one.

I further modified the appearance of the design during construction to produce the boat in the photo by altering both deck camber and sheer, and building a different deck and cockpit layout – with in particular the narrow, sweeping side-decks and coamings – as well as a new high aspect-ratio semi- pivoting daggerboard, a high aspect ratio lifting rudder and a wider, more practicable tiller (all necessary as I intended racing the boat), and altered the rig twice – both during construction and a few months after. Most construction details are different, too. Further detailed changes were listed in ‘The Boatman’ review in the October/November issue of 1992.

The final appearance of the boat – though not the hull – is different to both Fisher’s digitised design and the original ‘Ethel’. Fisher’s modified version – which he named the ‘Lillie’ – follows Holmes’ original layout of deck and cockpit, low aspect centreboard and non-lifting rudder, but with his own rig; and it is this which he offers in his on-line catalogue – though illustrated with a photograph of the changed deck and cockpit of my boat.’ 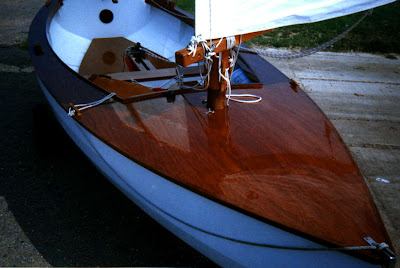 “Though the gloss is no longer -some eight years later – as deep as here, you can still see your own face in the
original finish.” 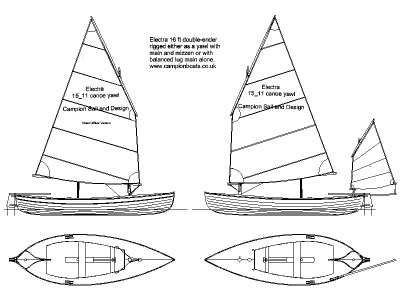 ‘Electra: with a lower, flatter and fuller floor, the lines of this canoe yawl could be likened to a compromise between George Holmes’ Ethels 1 and 111, but she is longer – with more freeboard – slightly beamier and certainly more burdensome with a sharper, deeper bow for better windward work as well as a drier, more comfortable performance in a steep chop. For 7 plank multi-chine or glued clinker. Stable yet fast, attractive and able, light yet strong, the seven plank aside hull goes together reasonably quickly to give a satisfying traditional appearance with modern materials. Sealed tanks run under the side decks for a good part of the hull to provide buoyancy and strength. Provision has been made for 55 kg of water ballast if required. These hulls give a true planing performance if sailed hard, whilst retaining the noted sea-kindliness of the double-ender if sailed more gently.‘

Tom Dunderdale’s elegant distillation of the British workboat, especially those from Cornwall, Kent and Sussex, really caught my eye. His flagship boat is the Apple and her plumb bow, lug yawl rig and raking transom hit home for me, but there are many iterations/variations. Conceived with an eye to tradition, the designer states:

Apple is a sweet-sheered, originally yawl-rigged, balanced lug day-sailer that has a surprising turn of speed. From her plumb bow to her raking transom, she has very much the air of a traditional boat, but her lines reflect modern thinking more than might at first be apparent. With the original small yawl lug rig layout she is exceptionally easily controlled with finger-tip-light steering at any degree of heel, showing the inherent balance of the hull form and will heel to some 40 degrees without driving the gunwale under when hard on the wind, remaining well mannered and docile. The flair of the forward sections tends to throw spray clear and she is surprisingly dry when sailed hard. Off the wind in a breeze, she lifts smoothly onto a plane without effort or fuss. In lighter airs, she slips along in a most satisfying manner, and will even sail herself for short periods if the sails are balanced carefully. For those who regularly sail in light wind areas, the large light weather mizzen makes for a truly stunning performance. And when the wind dies in the evening, she will row surprisingly well as the quarters are well lifted, the beam moderate and the weight surprisingly light thanks to the glass/ply/glass construction. Should a more sedate approach to sailing be required, the Apple will easily accommodate sand or shingle ballast bags as she has considerable carrying capacity without spoiling her sailing lines, and such disposable ballast ensures that easy manhandling ashore is not lost. Integral water ballast tanks can be built in to the decked version, too.

Apple was designed as a rewarding, handsome, open day-sailer for large lakes, rivers and sheltered estuary waters, one that could be built in a modest single car garage on a very modest budget yet would engender a real pride of ownership, with an ability and performance to entrance and enthuse her crew, most especially when sailing in company with modern craft, and not demoralize them with indifferent or poor sailing qualities once the novelty of sailing something ‘traditional’ has worn off. In her original open form, she is not, however, designed for cruising exposed coastal waters in strong winds – which is in keeping with other open or even partially decked designs, traditional or modern, old or new, including some supposedly able ‘cruising’ dinghies and dayboats – as it would be asking too much of such a light and almost totally open boat – and such a simple, inexpensive one – and probably of her crew, too. [But note that with the substantial reduction in open cockpit space as well as increase in weight to give the necessary momentum to punch through head seas, the decked, ballasted version is more suitable for open waters. The inherent exceptional balance of the design makes for far sweeter, easier handling than the hard-mouthed antics of some portly dayboats when over-pressed, whilst the ballast provides surprising power and stability with the crew inboard. There’s a general absence of slamming when driving hard through a short hollow chop with little thrown spray or when weaving through a confused head sea and partially luffing the crest and then bearing away down the back, whereas a full bowed ‘U’ sectioned boat in such conditions will stamp and slam if not stop, throwing spray, thin sheets or, if they’re really unfortunate, solid lumps of water at her luckless crew. In such conditions, a dry, well-tempered boat truly shines, and Apple is just that.] Within the constraints of the design, there really is little on the water that approaches her – she is handsome, able and distinctive.

Digging a little deeper into the Campion website (a word of warning: at first navigating the website is a bit like learning to drive in a foriegn country, challenging, but worth the effort) I discovered a wide range of delightful small boats, most of them with a traditional feel, and all drawn with the amateur builder in mind, using modern materials and construction techniques. With some of these designs, Tom offers a dizzying array of options, allowing the builder to tailor the boat he builds precisely to his needs. In addition to the Apple, I especially like the Pearl and Electra designs (see design notes above). I am so taken with the Pearl in fact, that, notwithstanding great designs by Oughtred, Welsford, Vivier and a covey of American designers, I’m ordering plans of Pearl. Of course, it’ll no doubt be a long time building, and I need to get my O’Day in this year. I’ve been corresponding with Mr. Dunderdale, both as a collaborator 0n this article and as a potential design client, and have found him forthcoming, generous and erudite.