More photos of SCAMP under construction.

She looks almost ready to cruise…

Doubling the after edge of cabin roof. Note double access hatches. They will be typical watertight type eventually. That long cutout in the center will be an access door inside the mast box to get at the mast step. Hard to see, but there’s a small drain hole at the base of the bulkhead so that rain water and spray don’t collect but instead drain away into the cockpit.

View forward. Note almost finished coamings and beamy cockpit. Although the primary accommodations goal was a comfortable solo berth on the cockpit sole with upper body under the “veranda,”  with filler boards, SCAMP’s generous cockpit will accommodate two sleepers out in the cockpit entirely.

And finally, the answer to the burning question every hardship-loving,  minimalist small-boat cruiser has secretly wondered about with regard to SCAMP: Yes, a grown man can sit entirely out of the weather—even without the boom tent. 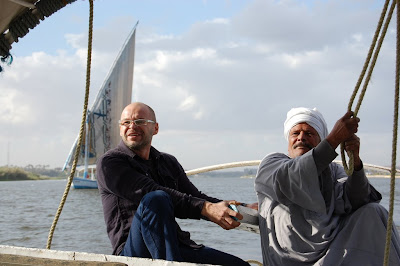 Paul Frankowski at the helm of a Felucca 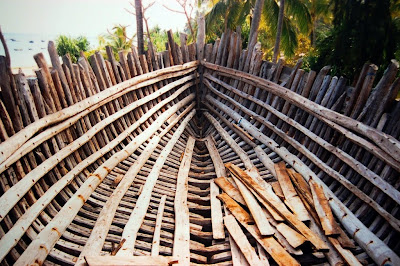 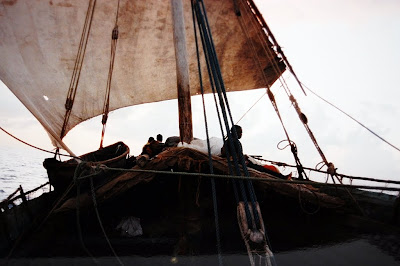 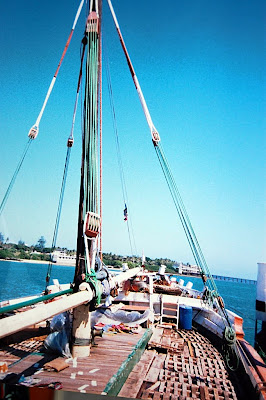 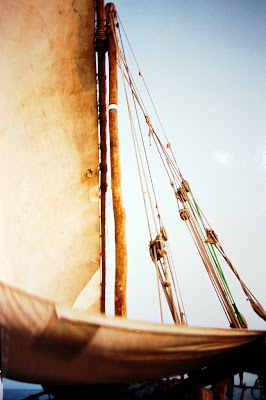 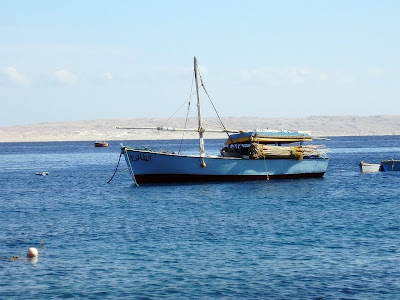 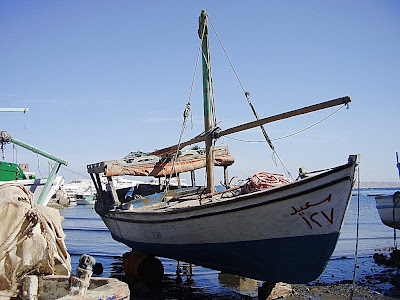 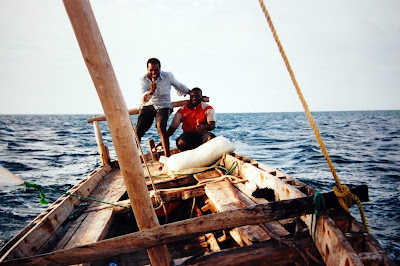 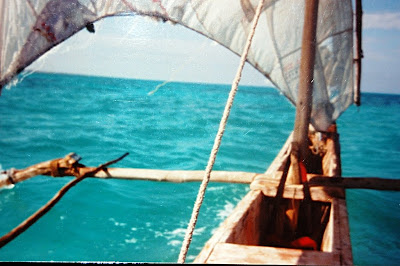 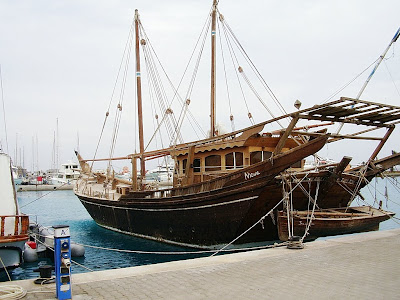 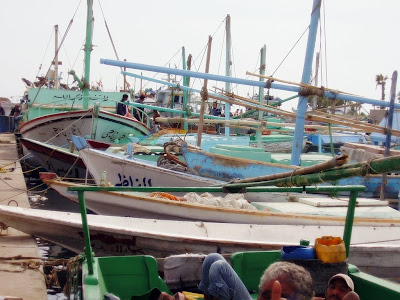 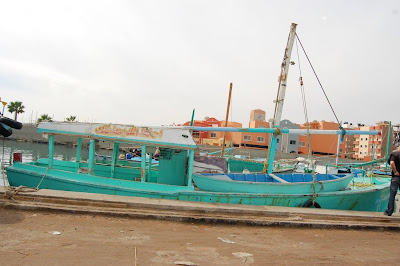 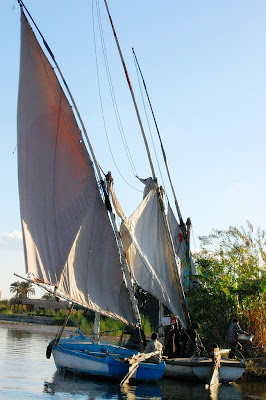 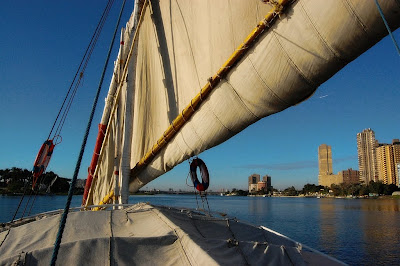 Felucca
Nile barge called FELUCCA, nowadays hull made from steel, wooden rigging sails Egyptian cotton. Lateen sail in order to set, is raised by halyard along long spar, from point were mast is touching spar up to the top of the spar, spar is made from 3 parts permanently fixed to mast in upward position, boom can be raised upwards parallel to spar, in this method it is easy to reef and store sail, relatively big rudder, same Feluccas have centerboard which can be raised when boat is crossing shallows, to steer skipper have to use whole weight of his body, strong weather helm 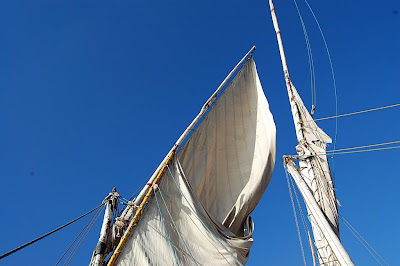 detail of sails of Feluccas 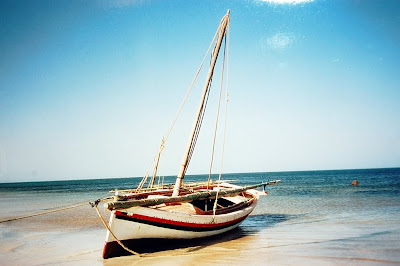 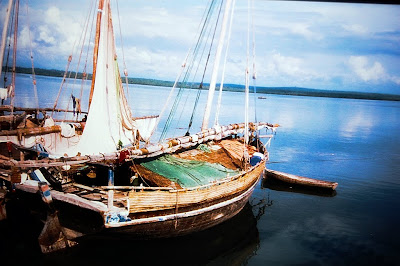 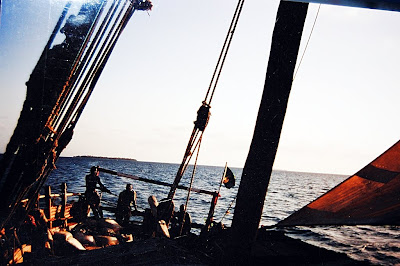 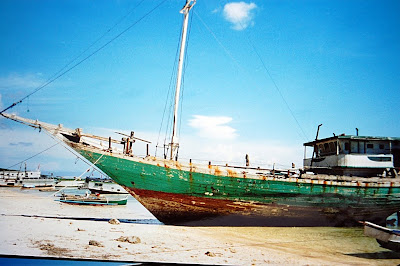 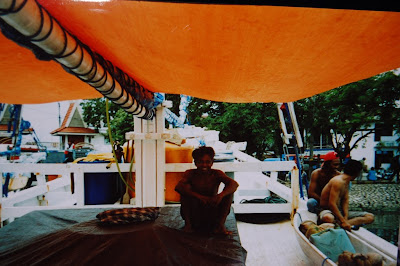 on deck of lambo perahu Makasar 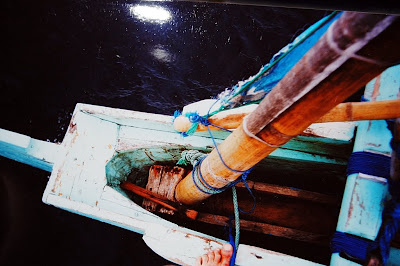 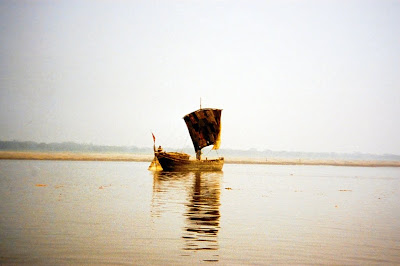 I’ve written about Paul before, take a look. Paul is on a quest to document working sail as it is being used in various locales around the world. He doesn’t have a grant or a salary that pays him to do this. It’s his passion and he is funding the project out of pocket. Here’s what I wrote before, explaining his mission:

Born in Poland, he immigrated to the UK in 1995 after learning to sail on the Baltic in what he terms “the tough school sailing world of a communist regime,” where he was denied entry to foreign ports. He’s made his way by working as a builder and was inspired by Clifford Hawkins’ The Dhow, and the book and film of The Last Sailor, by Neil Hollander and Harald Mertes to document indigenous working sail, or as he puts it, cargo ships.

After a visit to the Mediterranean, where he experienced the local ciaques, he sailed to Tanzania and Zanzibar where he managed to sail on a Jahazi, an indigenous dhow, and reports “it was like to be back in Vasco da Gamma times (with) no radio, no life preservers and so on.” Next he went to Indonesia where he sailed a Lambo Perahus, a type of Günter sloop. Lately he’s been to the Bahamas to document the Haitian sloop – certainly a lot of adventures. There is also a photo of an Indian dhow on the Ganges, so I would assume… ?

Paul has also published two articles about these craft in Polish sailing magazines. His next research landfalls would be to Brazil to sail Saveiros and to Madagascar where there are still plenty of cargo schooners, Gaolettes and dhows. I am hoping for the best of luck for Paul and the book he’s writing on this subject.

This year he cruised his Moody 333 Perhau from the UK to Egypt, and documented Felucca. He sent me another parcel of photos, some from his latest trip, some from earlier journeys, many of which I am sharing with you. As I mentioned above, Paul has no funding beyond his own resources. I feel he is working on a very important project and would like to suggest that anyone who can help Paul with funding and believes in his project, step forward. Email me and I’ll connect you with Paul. You can work out the details together.

Construction of our SCAMP prototype continues. At her new 11′ 11″ size there’s also plenty of room to sleep two in the cockpit with filler boards.

If you want to visit Port Townsend for two weeks in December, learn boat building from the very talented staff at the Northwest Maritime Center, and tow your own SCAMP home, contact the Center at: 360-385-3628 x123