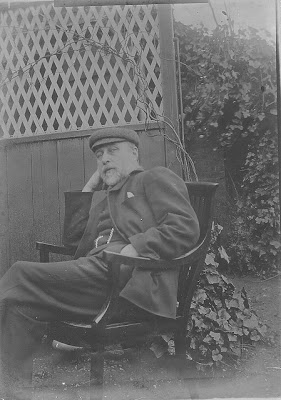 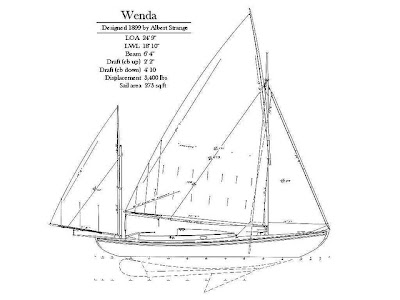 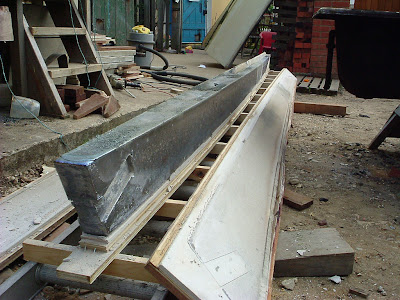 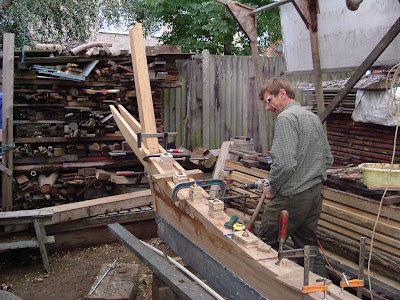 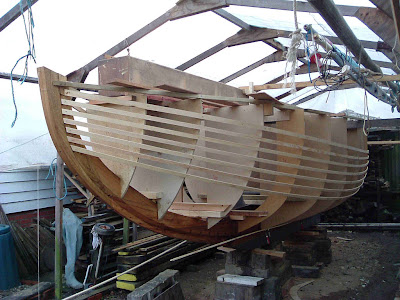 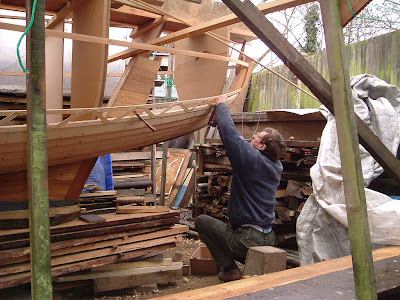 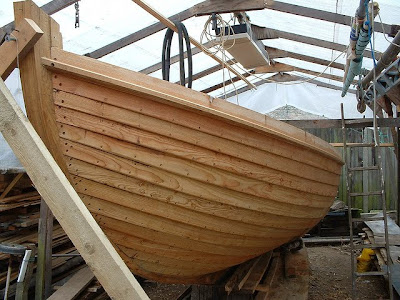 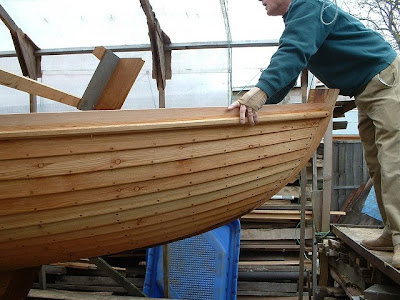 A stern “to die for” 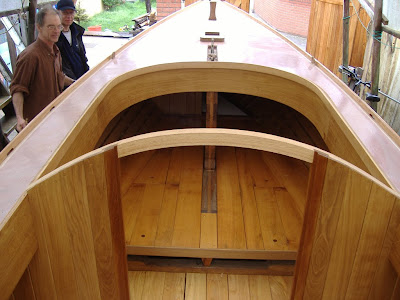 That expanse of deck will be broken up by 3 deadlights to illuminate sleeping area and forepeak, oars, anchor, jib sheet blocks etc. 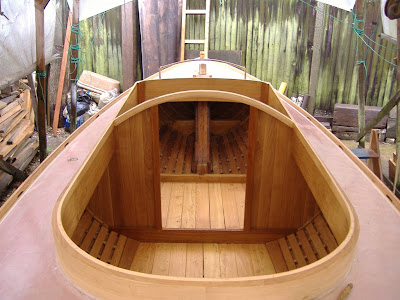 Internal fitout complete apart from stove to be near bulkhead on port side. Keep it simple! 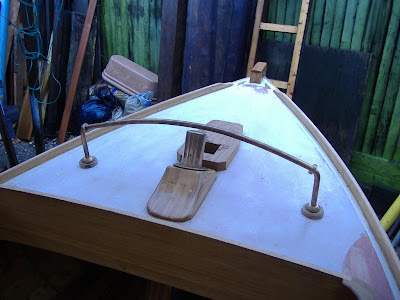 Building outside the lines and raising the deck 2 inches meant the steeply raked rudder shaft reached 2 inches further back, very close to the mizzen. This left no room for the horse to be as drawn between rudder and mast, so rather than move either we moved the horse forward a few inches to avoid a crowded look. 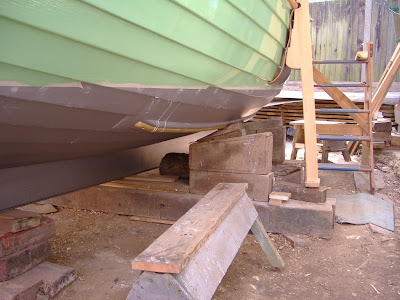 A couple of planks at the bilge have sacrificial layers added for a few feet, to take the wear of grounding. We may add a metal-shod rail. (They did, creating in effect, a bilge runner , ed. ) 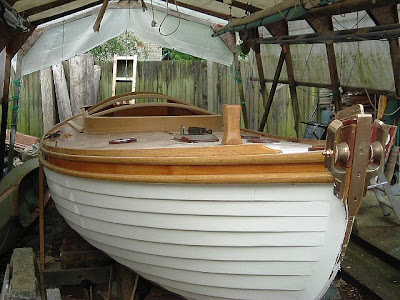 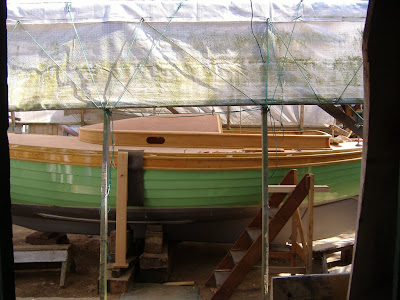 I first became acquainted with Albert Strange through a WoodenBoat article (WB #64, pg 49) by Mike Burns who had discovered and renovated Strange’s first Sheila. That article appeared in 1985, and I’ve since never lost interest in the work of this most distinguished designer. There is a wealth of research and information on Strange, his work and that of some of his contemporaries to be found at the Albert Strange Association website. The site also offers views and articles on Strange designs sailing today, and I highly recommend it. Dick Wynne is one of the principals of the Association and and author of many of the articles found on it’s weblog. He became enchanted with a smaller Strange design, Wenda, the plans for which were resuscitated and offered by WoodenBoat. Initially imagining that he would build her himself, after taking some steps in that direction, Dick began to realize the project would be better realized by a professional. In his words:

‘The rationalisation continued: If I could not build her someone else would have to, at least in part for me to complete. And whilst I was about it, why not have what I really wanted, a traditional clinker rendering of the design? To my mind this would show off her lines to perfection, as can be seen in Jake Roulstone’s Sally, and provide a high strength-to-weight ratio.

It didn’t take long for me to locate Fabian Bush (of Rowhedge, Essex)* on the basis of a hull-only clinker build by him written up in Water Craft magazine (Molly Cobbler in No25, Jan/Feb 2001). Molly is a super boat with a lovely job of lining out, so if Fabian was game to repeat the experience I was too. As Fabian puts it:

“I must say that I have always found it more pleasant and satisfying to be afloat on a traditional-built boat … in a way, maintenance is easier (simply using basic traditional paints and varnishes), the materials and surfaces are kinder, the smells are more pleasant, the sound of the boat sailing and at rest is more gentle and ‘full’; the hand-built nature of a traditional boat is much more evident …”

I was keen to achieve a robust craft in which I need not worry too much about taking the ground or indeed the odd knock, and equally keen to keep costs down. After some discussion and thought Fabian suggested doubling up the planks at the bilge for a few feet, with the ends faired-in, in fishing-boat style. As well as a measure of protection, this would impart additional rigidity and may enable us to dispense with bilge stringers (longitudinal internal members, one each side against the frames) along with the inconvenience in maintenance and repair which they contribute. Their value in adding rigidity to a clinker hull, where the planks are joined to each other as well as to the frames, seems questionable.’

And so happily the work commenced and was brought to fruition. I’ve selected a sampling of photos of the build process here, but there are many more to be found on the ASA site. You can also track the project through several articles written by Mr. Wynne as the work progressed from inspiration to completion, with a progress report along the way. There is also a bit of commentary by the late designer Phil Bolger, who drew up Wenda’s plans for WB.

*I first discovered Fabian Bush also through a WB article on the British Wooden Boat Revival back in 1986. Take a look at his Osea Brig in that article.

This is the first installation of what will likely be a three part series, stay tuned.