Friend and reader Michael Anderson has been busy with converting his Montgomery 15 interior from the two full length bunks to a more practical layout for solo cruising. No small project, Michael has cut out sections of the fiberglass liner to make a seat with proper headroom and a functional galley.

Michael adds: “Note my “three essentials” i. e. the thermos jug with coffee, a bottle of water and bottle of red wine are accessible without moving the cover sheet of the galley!” Look for a complete article in a future issue of the magazine—Eds

We fell in love with these minimalist cookers and decided to start selling them through the magazine. The Kelly Kettle is an ingenious double-walled chimney cooker with water contained in the chimney wall. The Kettle works with any fuel (sticks, leaves, bark, etc.) and will boil water in 3-5 minutes. While the water is boiling, the user can cook over the chimney flame. The result is a lightweight, simple, dead reliable in all weather, minimally invasive way to heat water, cook and enjoy an open flame at your campsite. The Trekker-Small model weighs only 1.3 pounds and holds 17 ounces of water. Our kit sells for $81.95 and includes Kettle, cook set, pot support and carrying bag.—Eds 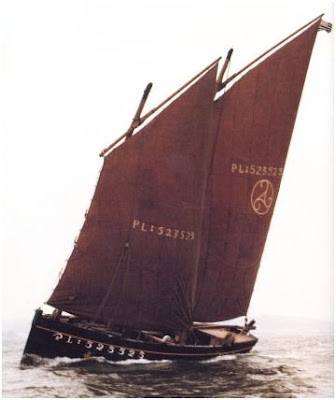 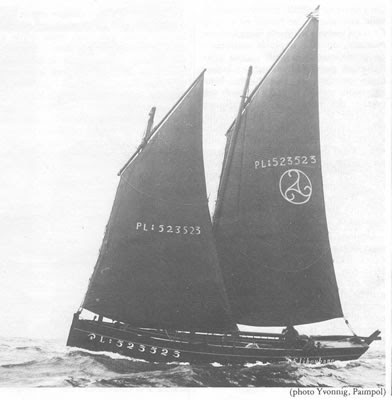 The model boat is a sardinfiskare from Brittany. Just “Eliboubane“ who inspired us, is typical of new construction at 10 feet (LOA) has been reconstructed and built by a French artist. Type of boat was very common in France before the more modern engine fishermen took over. What is most striking is the “cocky“ that the stem is straight or has a “negative“ gradient. The rig is of loggerttyp and in our case with two masts. Type of boat is seaworthy and fast. 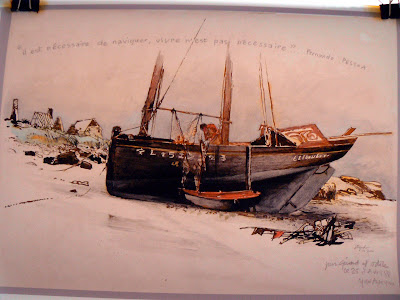 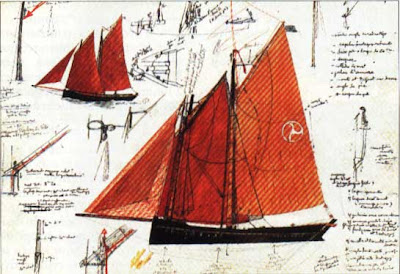 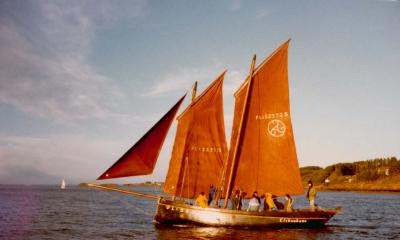 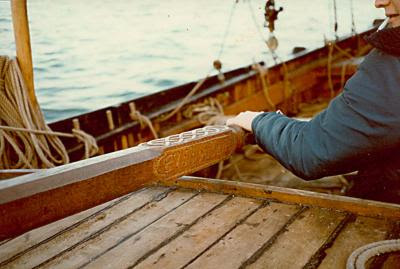 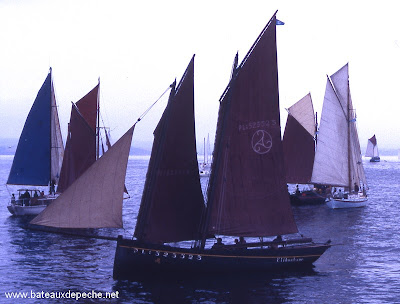 (The Tools of the Passion) 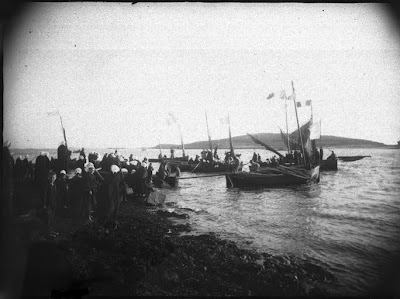 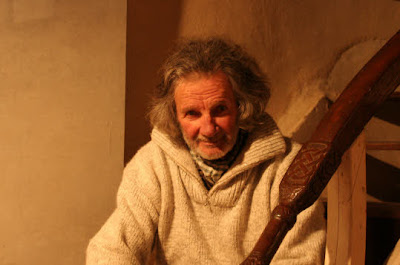 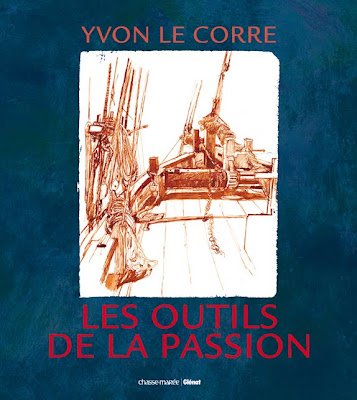 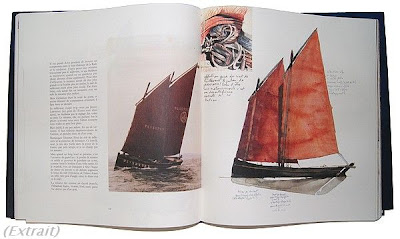 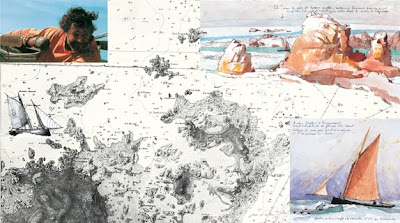 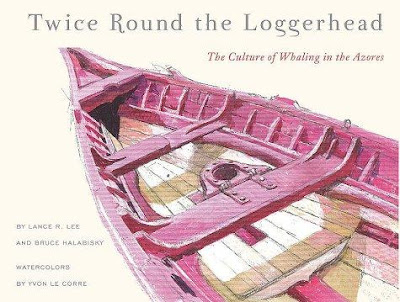 ‘Twice Round theLoggerhead’ was written by Lance Lee and Bruce Halabisky. It’s a poetic tribute to the Azorean whaling tradition, illustrated by Yvon.

Francois Vivier is a French boat designer who, after a long practice as a naval architect designing large commercial craft, turned his eye and hand to smaller, more traditional craft. He primarily draws boats based on tradition but modified for more contemporary usage and building techniques, and does so brilliantly. He also occasionally draws plans for very traditional Breton boats. Eliboubane was a rather special request from celebrated artist Yvon Le Corre. Here’s Francois:

“Yvon La corre is both an unequaled artist and sailor. Both are linked as his boats have always been a means to wander with paper and pencils and come back with awesome illustrated notebooks.
When the first volume of Ar Vag, was published, with an extensive description of Breton sardin boats, he wanted to rebuild one of them. Eliboubane was built in 1981 by Daniel boatbuilder in Paimpol on a line plan drawn by myself on the basis of historical plans. Original sardin boats had a crew of 7, but Yvon was frequently alone or with only a few people on-board. So he tried many rig arrangements, to avoid gybing the sails when tacking”.

Eliboubane (10m l, 3m w, 6.4 T d) I have been in love with this boat since I first saw her. Her owner, Yvon Le Corre is a highly respected and rather prolific painter/illustrator and author. He’s also widely regarded in his native France as a gifted sailor, some have even likened him to the fabled Moitessier in his love for the sea. As Francois says above, he’s figured a method for sailing his dipping lugger singlehandedly. Admirable. Yvon uses his boats to travel and makes sketches along the way, which he then turns into beautiful paintings/illustrations.

I have a copy of ‘Twice Round the Loggerhead‘, a special project written by Lance Lee and Bruce Halabiskey documenting the life and waning culture of the Azorean whalers. It’s beautifully illustrated by M. Le Corre, who does more than justice to the elegantly elongated whaleboats developed in the Azores.

After years of trying to contact M. Le Corre to no avail, I now have a slow mail address to write him, hopefully more to come.

Quick clip of SCAMP under sail.—Eds