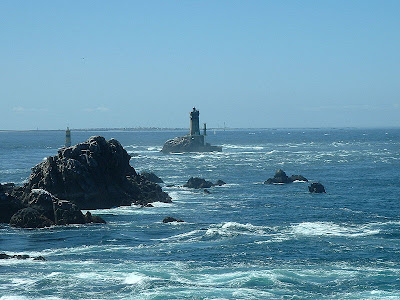 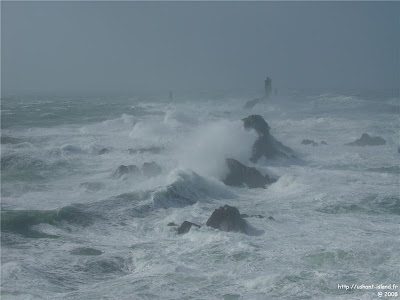 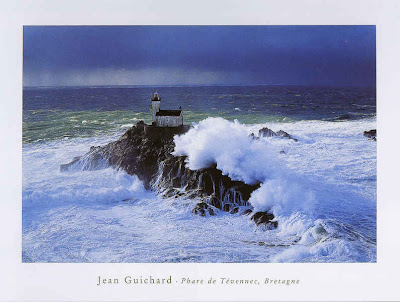 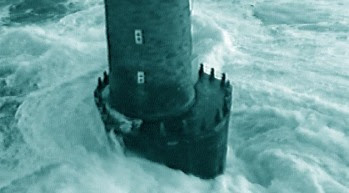 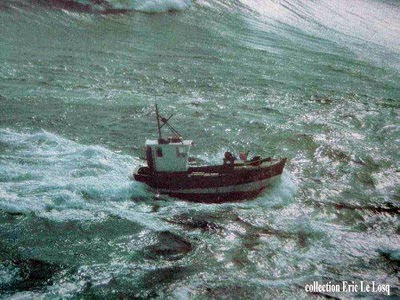 Caprice FLOTS
In 2601
AD 184855
troller built in 1966 in Douarnenez
Site Jean Marie Tanguy
Skippper: Paul Milliner – Ile de Sein
main features;length:6.87 m Width: m GRT: 5.41 tx engine: 41 hp MWM
Incorporated by Eric Losq Plogoff, it was then registered in district of Douarnenez. He is now finishing his life quietly in the cemetery of boats Locquéran
in the port of Breast with Vagabond Islands (photo G) and with Hope in God (photo D)
the bar in the Raz 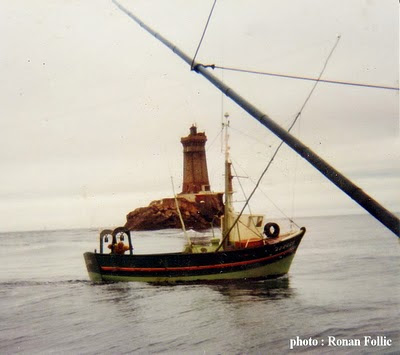 cyclone: CYCLONE
In 2666
Ad 279097
potters / long liner / shell built in 1970 to Freight
Construction Stipon
Skipper: Follic François (François Cyclone) – Ile de Sein
main features; length: 9 mwidth: 3.58 m GRT: 7.97 tx engine: 90 hp Baudouin
During a campaign Jacques scallops in the harbor of Brest, “Cyclone” hook a former anchor in the middle of the pool shell and sink. It will then be salvaged and sold to La Rochelle.
Follic Francois (Francois said cyclone, named after his old boat) has long been the patron of the “City of Paris” SNSM the canoe from the island of Sein
the bar in the “Trouziard” also said the Torpedo channel (Raz de Sein in the Old)
A Breast is not only a tradition to name the boat to his boss, it’s almost a necessity as many surnames are identical (Spinec, Guilcher, Follic, Milliner, Fouquet …). Jos Fouquet told me that at one point there were 17 Joseph Fouquet on the island …
After the accident in the harbor of Brest, “Cyclone” will turn to the districts of Saint Brieuc and then Sables d ‘Olonne under the name “Candy” and then to La Rochelle in 2005 still under the same namPhoto taken shortly after the accident at the port entrance channel. The boat was towed to the level of ASM to clear the password input port where it presented a danger courtesy Audiernnes les Dundees 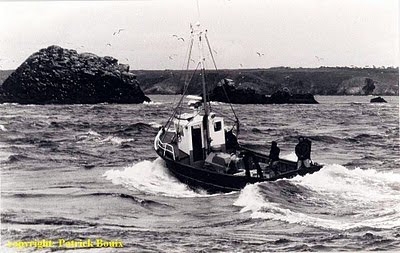 Cyclone fishing in the Raz. Note the birds. This is how the fishermen hand or longlining for sea bass know where to go. courtesy Audiernnes les Dundees 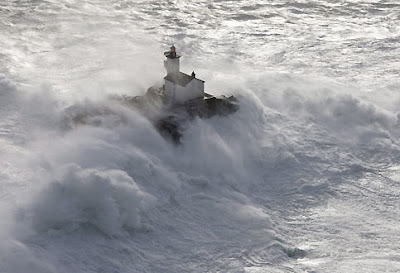 Tevennec lighthouse is located at the tip of Raz in Brittany. The transition from the tip of the island Raz de Sein, presents enormous difficulties and dangers, in part to the destructive force of the water.
Crossing these waters at night is suicide .

Courtesy Purgatario de Tevennec
The French Raz de Sein translates literally in English as ‘storm within’. How apt. It’s a treacherous, infamous stretch of water at the confluence of at least two opposing currents off the coast of Brittany that can be a nightmare for mariners. It’s also been and is a favorite for adventurous and hardy fishermen attracted to the bountiful sea life there. Sea bass is the draw, apparently sustainably harvested, at least recently. The contemporary practice of fishing in this fabled area is written about in Maritme Life # 34, a sadly defunct publication which was a joint effort between WoodenBoat and Chasse Maree.
here’s what Wikipedia has to say about the Raz de Sein:

“The Raz de Sein is a stretch of water located between the Isle of Sein and the Pointe du Raz, in Finistère, in the Brittany region of France.

This tidal water is an essential passage for vessels wishing to pass between the Atlantic and the English Channel because further west, at high tide, the Isle of Sein and its embankment stretch for more than thirty miles.

This is a very dangerous zone for navigation, due to the violent sea currents from the tides (up to six knots during the spring tides). The current causes the sea to rise quickly, and it is recommended that heavy vessels should only attempt to cross this strait at still water during calmer conditions.

The Raz de Sein is bounded by the La Vieille and Petite Vieille lighthouses, and by the shoreline of the île de Sein.

On May 26, 2006, Édouard Michelin died while fishing for sea bass on his ship Liberté. The skipper of the boat, Guillaume Normant, also lost his life in the accident. The boat was found two days later with no apparent damage, roughly 15 km from the Île de Sein.”

And Yachting Monthly had this as an introduction to the video below:

“Off the NW tip of Brittany lies the Raz de Sein. Few other stretches of water have such a fearsome reputation: the tide can rip through at 6 knots at Springs, and when an Atlantic storm hits, the result is nothing short of awe-inspiring.

Pity the lighthouse keepers of old. The Ar-Men lighthouse, the most westerly of those marking the shoals around the Île de Sein, was nicknamed the ‘Hell of Hells’ by its former keepers. Closer inshore, the square tower of La Vieille lighthouse was the second last in France to be automated, due to the protests of the live-in keepers. It took until 1995 for the light to be automated and the keepers to depart.”