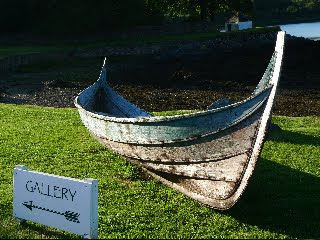 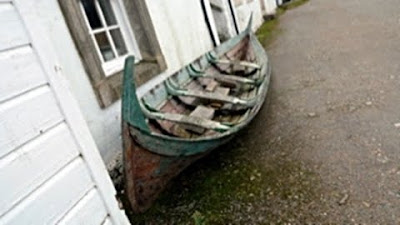 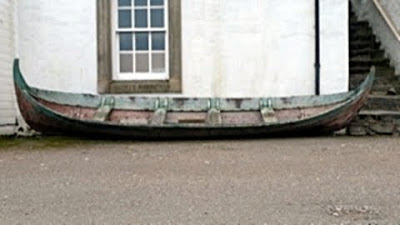 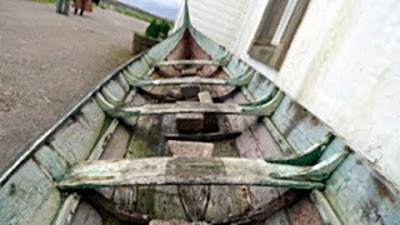 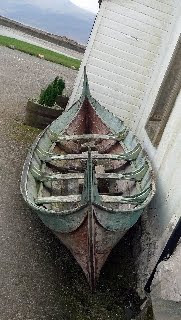 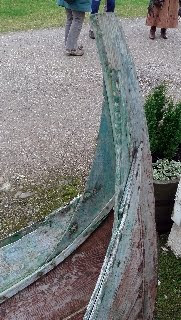 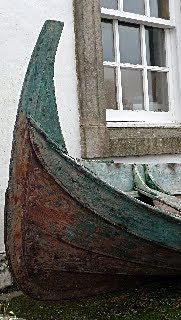 In a discussion with acclaimed small boat designer Iain Oughtred about the taxonomy of certain Norwegian boat types, he casually mentioned that he was involved with a Nordlandsbåt that had recently been discovered on Skye, his home. Piqued my interest, he did. After some wrestling with google translate we more or less resolved that issue and Iain responded to my request for some info on the ‘rescue operation’. It’s a rather interesting story.
Iain contacted Gunnar Eldjarn in Norway to ask for help both in identifying the boat and how to proceed. Gunnar builds traditional Norwegian boats and his website is here. Gunnar identified the boat as a Krumstevning, which he elaborates a bit below. He further named it a Ranværingsboat, a boat built in the Rana area, a little more that halfway up Norway’s west coast. They are dating the boat anywhere from 1840 to 1890, pending further investigation. Iain had originally envisioned a restoration, but Gunnar went on to say:

“It is a krumstevning. A treroring and has had six oars.
A small treroring like this is actually a 2 1/2 room boat with 3 rooms. This is not very special, but is a northern Norwegian specialty.
I see now that it has a very special keel, a gatakjøl which has both the keel an the keelstrake in one peace. This I have heard about, but never seen on a small boat like this.
Then, most of the strakes are probably hewn, and almost impossible to shift, at least very difficult.

I would actually be careful and keep the old boat without much repair, and also use it very little. All the old material is brittle and cant take much beating. Making a copy is a good idea. But it is not a very easy boat to build. But if the old boat is kept untouched, 100 copies may be built and used. If the old one is much repaired, the original is gone. The boat should be thoroughly documented, lots of good pictures, measurements etc.
The boat is worth a lot, not much money, but as a cultural document.
Please take care of the boat.!!!!”

The 18′ x 54″ boat is on the grounds of large estate in southern Skye, a district named Sleat, and the owner contacted Iain at the urging of one Fergus Walker, who I’ve written about before. Lucilla (said owner), Iain, and some other interested parties are in the process of securing a tent to protect the boat from the elements and commencing preservation strategies. A little more from Iain, first a portion of his reply to Gunnar:

“Many thanks for your message. It is a valuable contribution to our quest, and we are privileged to have this authoratative statement which confirms our feeling that this is a rare and special boat that deserves to be cared for properly. And measured up, recorded, photographed, drawn up as Bernhard F would do. That will be my job.“

Plus this to me:

“Lucilla wants to keep her close to home, ultimately on display with all relevant information presented in English, Norwegian and Gaelic.

I have found a nice board of Scots Pine to replace the missing capping piece on the starboard gunwale. And some scraps of oak for missing and damaged bits of frames. We will have tollepinnar (thole pins) for the keip/’kabes’/oarlocks. I got the Norwegian Varnol thin penetrating oil. I hope that Mark Stockl, the boatbuilder from Ullapool, may be able to do much of this work, after setting up the cradle, which will support the hull comfortably all round. She may even need to gently settle into her rightful shape before new pieces are fitted!

I do not think the boat will actually be used. She’s quite fragile. But hopefully we could just launch her and take some nice photographs.” I will see if Lucilla is up for asking Gunnar about a replica that she can play with.

Iain has consented to keeping me updated on progress made good on the ‘bonny wee boat’ and
I’ll be letting you know.