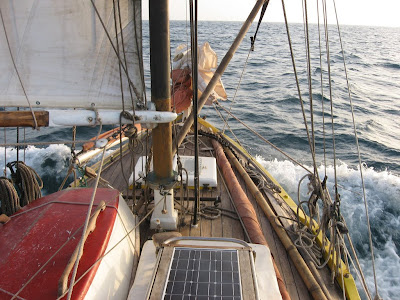 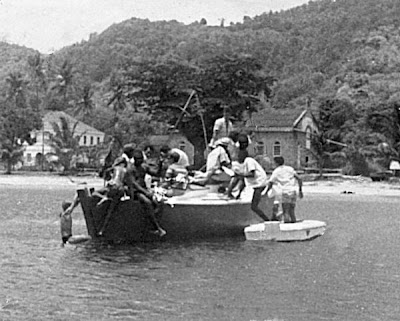 Plumbelly‘s launch off the beach in Admiralty Bay, Bequia where she was built. 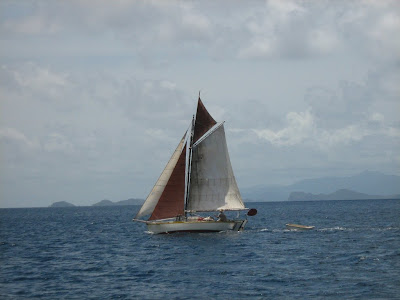 Sailing down to Bequia from the US, Grenada in the background. 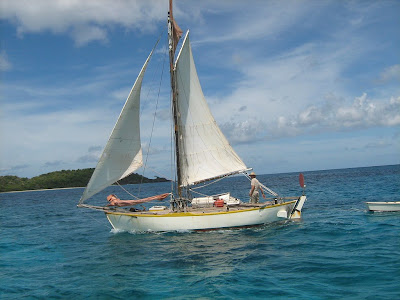 Landfall in the Caribbean, down from New England. 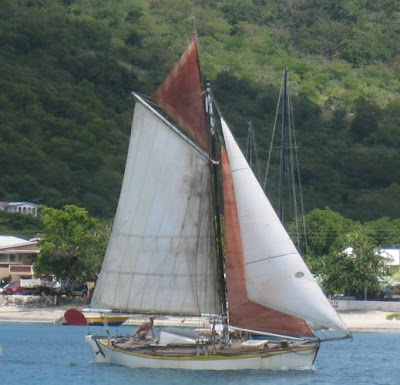 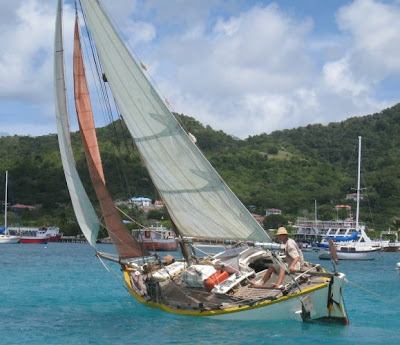 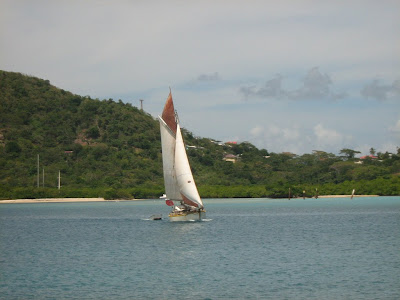 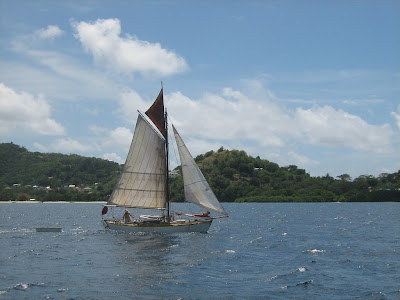 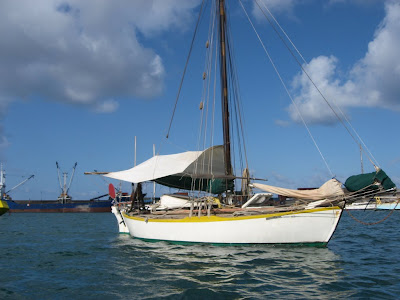 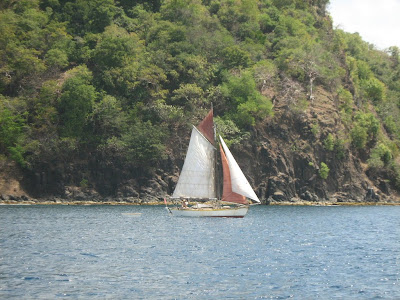 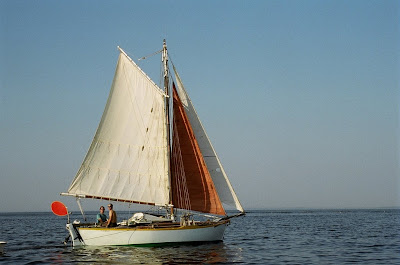 Patrick and Joel just before Joel manifested his illness in the most visceral way. 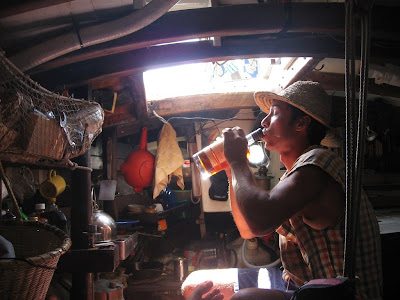 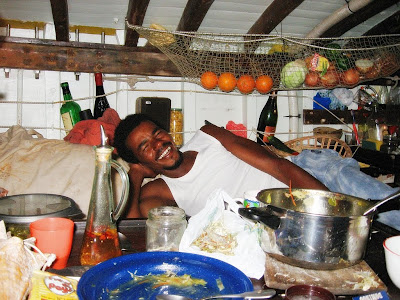 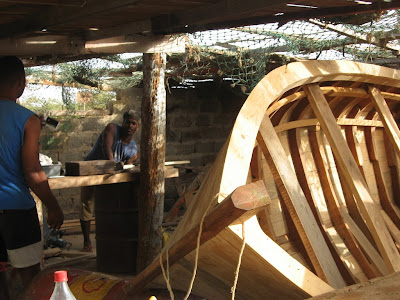 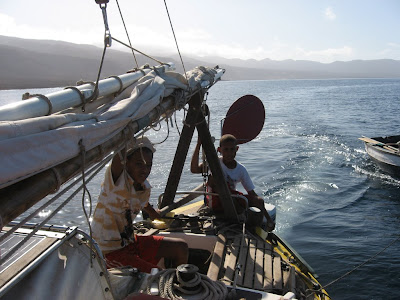 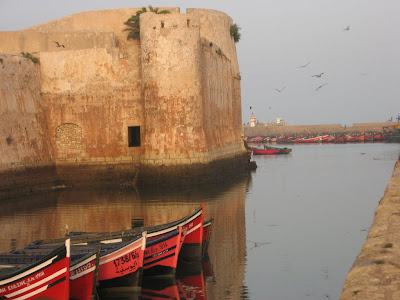 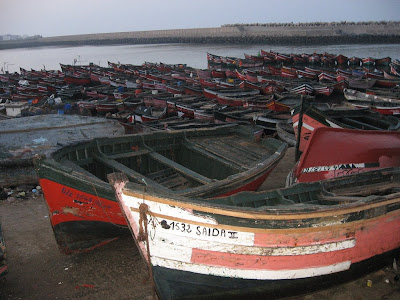 About half the fleet at El Jadida 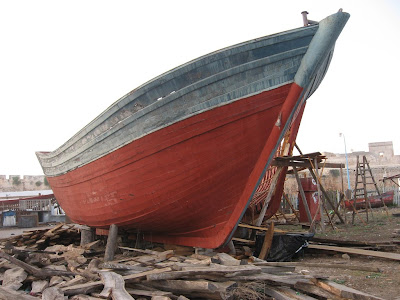 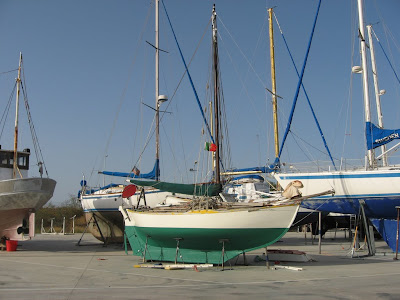 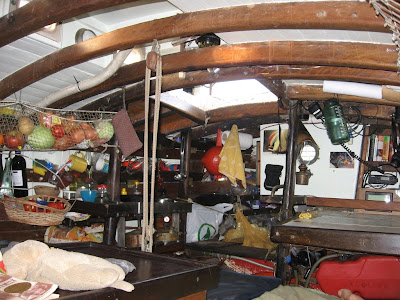 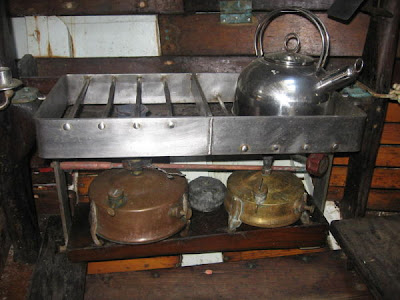 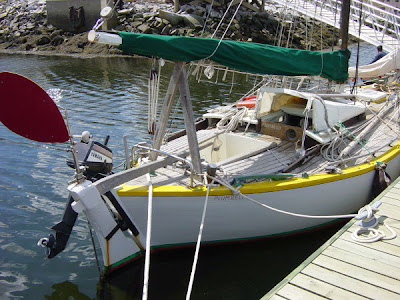 Back in New England 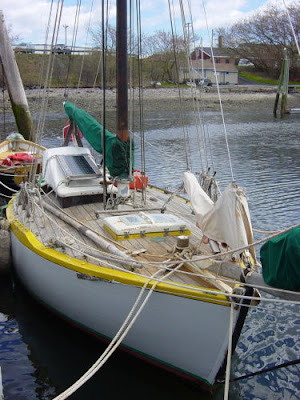 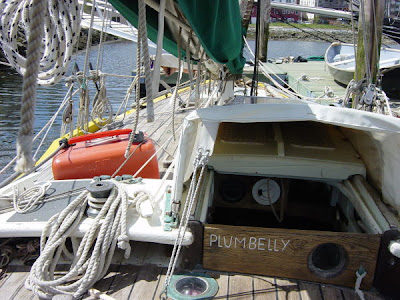 Save for the canvas dodger over the companionway 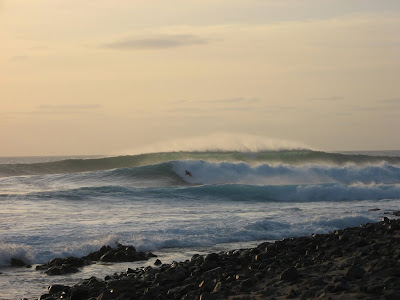 You can just about hear J. Buffet and a steel band in the background. This very interesting boat turned up in one of those tiny ads in the WB classifieds. I’ve been to St. Vincent and was regaled with stories of the Bequia whalers by my host, Captain Jack Longley. We were to deliver a 65′ steel motorsailer from St. Vincent to the Cayman Islands. This is back in the early 90’s. I was able to get away and had quite an adventure. But the story of the Bequia whalers, one of the very few traditional whaling communities still allowed to hunt whales, (up to 4 per year, though they rarely make quota, in open boats w/ harpoon, no mods no motors, sail only) has stayed with me and continued to intrigue me over the years. There’s precious little info on them on the web.
Plumbelly is the quintessential Caribbean cruising boat, though I’m sure she fares well in other waters, and I’ve included some photos from Patrick’s adventures across the Atlantic. She was built on a beach in Bequia by local shipwright Loran Dewar and Klaus Alverman, a German ship’s captain who commissioned her. Built to Bequian whaleboat lines with the exception that she’s not an open boat, but flush decked. I’ll let the current owner, Patrick DaLilla, tell the story:

“When I bought my boat in Maine six years ago, people told me that she was famous, built on an island called Bequia and sailed twice around the world. At the time I preferred to consider her more “tried and true” than famous. But as I guided my (by now) beloved little boat back to her birthplace after her 28th crossing of the Atlantic, I couldn’t help but revel in her amazing history.
PLUMBELLY was built on the beach in Admiralty Bay under the shade of the palm trees in the place where Tommy Cantina’s now sits. An eccentric German architect and ship’s captain named Klaus Alverman wanted a small yacht to cruise the islands in, and he set out to build it with the help of Bequian shipwright Lauren Joe. They built the boat in the local tradition: hewing carefully selected timber from around the island into the shape of a modified two bow fishing boat. Her full body inspired the name as a passerby commented “look like she got a big plum in dee belly mon!”
She was launched in 1965 and a few years later set out to cross the Pacific Ocean. She had no engine, no electricity and no self steering device. After four weeks of sailing sheet to tiller with the bow down, PLUMBELLY arrived in the Pacific islands sporting a beard of algae on her bowsprit. While resting in Tahiti, a big red double-ender came gliding into the harbor with a wild eyed Frenchman at the helm(could this be Moitessier? ed.). The man had just sailed two times around the world non-stop. The two men became friends and Klaus obtained a design for a simple wind vane from him. He built the wind vane in New Zealand and it is still working it’s magic today.
PLUMBELLY and Klaus returned to Bequia to a heroes’ welcome; the first Bequia boat to be sailed around the world. For those in Bequia that know the story of PLUMBELLY there is a gleam of pride in their eyes when they speak about it. This is my second time in Bequia with the old girl and I’ve yet to meet someone over thirty that doesn’t know the name. And it’s not just in Bequia. In places as far afield as Senegal I’ve had people ask me, “That’s not the PLUMBELLY, is it?” “Bet your boots it is. The one and only!” People just smile and shake their heads.
When Klaus finally stopped after twenty odd years of sailing, PLUMBELLY ended up in the hands of an American science professor in Massachusetts. She was used for day sailing and coastal cruising until an adventurous young man from Maine bought her and once again pointed her bow in the direction of faraway lands. Now I am the third in a line of owners from Maine (actually I’m from Ohio but I bought the boat while living in Maine) whom PLUMBELLY has carried safely across oceans.
I once read that art is an expression of Humans’ love of labor, and people have described Klaus’s relationship with PLUMBELLY as “a grand love affair”. In the case of the Bequian shipwrights it was a love born out of necessity, for nothing less than a sort of love can create a vessel seaworthy enough for whaling. In PLUMBELLY, Klaus created a working monument to this fading tradition, a swan song which fused his love of construction and love of the sea. She is a vessel that has turned into a legend in the waters that she plies, always popping up to the delight of everyone who ever dreamed of just getting in a boat and going.”

Design & Construction
PLUMBELLY was designed and built in 19the Bequia West Indies by Loran Dewar and Klaus Alverman. Launched in 1965, she was designed with a spoon bow, round bilge and a deep full keel. She has an attached rudder and a canoe stern. PLUMBELLY was designed and built for offshore sailing. The hull is constructed of 1″ pitch pine in the topsides and 1″ Silver Balli in the bottom all over 2 1/4″ x 2 1/2″ tropical white cedar sawn frames. In some areas the frames are doubled. All frames are on 11″ centers, the floor timbers are 2″ and 3/18″ sided on varying centers. PLUMBELLY has an interesting keel structure: the keel is an iron box that is fabricated with baffles and 1 1/18″ iron bolts welded into the inner web structure. The bilge area has been filled with concrete for additional ballast. Her decks are also built of planked 1′ pitch pine over 2″ x 3 1/18″ deck beams on varying centers. She is flush decked with a small trunk cabin at the companionway with sitting headroom. Her mast is solid and round, stepped through the deck and lands on a mast step in a reinforced toerail. It is then drilled to take a lanyard from the dead eyes in the rigging. PLUMBELLY is gaff rigged and flies a topsail with a jack yard.

Interior
PLUMBELLY’s interior is quite simple: there is a general storage area forward, followed by the cabin. The cabin has a platform with cushions on either side and a storage box in the center that doubles as a table. Aft to port is the small navigation table and an area for some electronics. Aft to port is the galley which has a two-burner kerosene stove and a fresh water pump that uses a jerry jug for a water tank. (Kerosene is also used for cabin light.) Aft of the galley is an area for the batteries. There is then a small companionway that leads to the cockpit.

Surveyor’s Commentary
Over all the boat was found to be in good condition. She has had good care and maintenance over the years. The vessel was built to high standards and it is reported that Klaus Alverman sailed around the world in her. This vessel was designed and built for this kind of offshore sailing.

This boat is currently being offered for sale by David Jones Yacht Brokerage and has full specs listed on his site. David has a keen eye for interesting boats and I may do an article on his brokerage, located in Camden ME. The asking price of the boat is 20K, she’s well found and has lots of equipment for cruising. If I had the 20K…
Patrick also mentioned, in response to my query, that he’s lived aboard for 3 years. She’s lying in Rockland, ME.