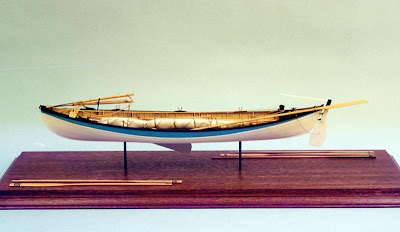 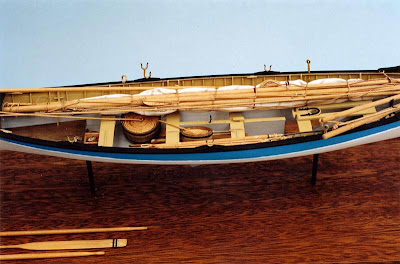 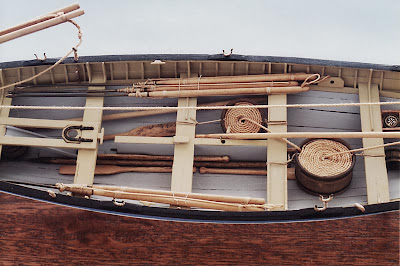 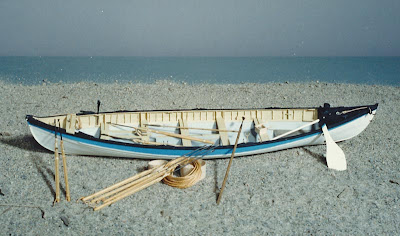 Photo 1—Port side view: This was a Beetle whaleboat, so-called as they were built by Charles Beetle, a whaleboat builder from New Bedford, Massachusetts; in fact, the name “Beetle” was burned into two places on the completed boats. This model was built to a scale where 1/2-inch represents one foot and was the subject of a two-part series of articles published in Seaways Journal of Maritime History. The model was based on the last boat Beetle built. On completion, it was shipped to the Mariners’ Museum where it can still be seen today.

Photo 2—Midships and a look at the gear: The gear aboard a whaleboat was highly specialized and included not just harpoons used to fasten to a whale and the lances that were used to kill the creature, but also the line tubs. In this case the tubs were built with individual staves, as were the baling scoop and the fresh water keg. The harpoons and lance tips, the boat knife and hatchet head were made from nickel silver, oxidized to a soft patina representing age, and the edges were then polished to simulate having been recently sharpened.

Photo 3—Interior detail: Whaleboats were ceiled inside, meaning that they were planked inside and outside the frames. This model is also an example of a painted model as opposed to being polished Boxwood. At the right-hand end of the last photo of the interior of the boat the compass can be seen, required for situations where a boat lost sight of its parent ship. The compass in this model boat was gimbaled as were the real ones. There are paddles in the bottom of the boat used when quietly approaching a whale on the surface. All of the equipment has been aged to represent usage.

While this model was built to be displayed on a regular base and mounted on posts, Roger decided to see what it would look like set up on a simulated beach. This was done in his basement, on a piece of cardboard with a layer of sand scattered on it and two different coloured backdrops.

The model is fourteen inches long. 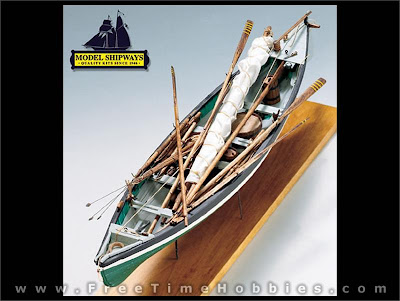 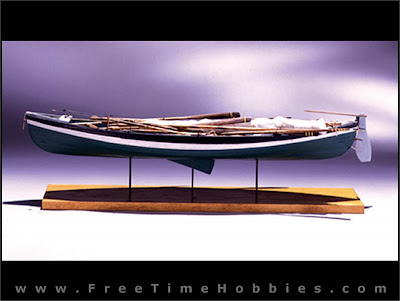 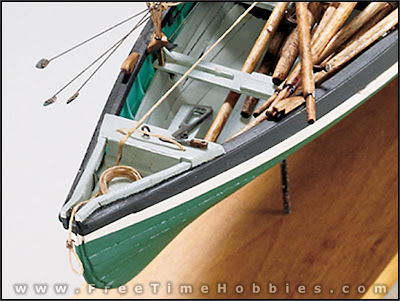 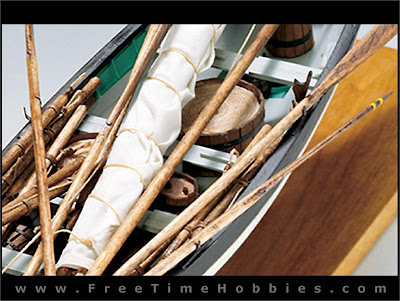 From 1720 to 1920 nearly 60,000 whaleboats were consumed by the American whaling industry. With a useful life of no more than three years, whaleboats were discarded on the spot throughout the coastal U.S. and around the world. Remarkably, only a dozen or two have survived to become part of today’s museum collections.

In 1916, the Dartmouth Historical Society commissioned the building of a half sized model of the bark LAGODA. Local whaleboat builder Joshua Delano was retained to build the seven half-sized model whaleboats needed for the project. Delano built these models according to the design of the full-sized boats he had built for the whaling industry for more than forty years.

Whaling historian Erik A.R. Ronnberg, Jr. made a thorough study of Delano’s half-sized boats in order to produce this kit of a uniquely American working craft. 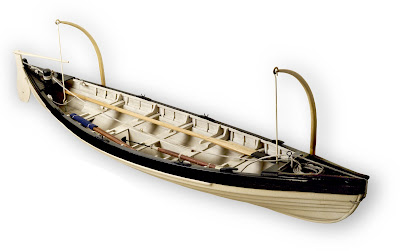 Whalers had no equal in handling an open boat at sea. At a time when whales were still plentiful as well as fair game, they were hunted in relatively small open rowboats. They approached a whale closely so as not to miss with a toothpick-like harpoon. At least when comparing it with the bulk of a seventy foot long leviathan sperm whale. And the Kings of the Sea didn’t take kindly to being hunted, giving rise to the shanty of the harpooner: A Dead Whale or a Stove Boat.The whaleboat rode the waves like an albatross. For lightness, grace and speed it simply had no peer. The buckets held up to a mile of line. The harpooner would stand on the stern holding his harpoon. A successful throw might mean a long chase, the whale taking the boat in tow. The harpoon line would be belayed on a single pollard on the deck. The double ends made it easy to move in two directions, a slap of the tail of an angry whale had better be avoided. Our hand built whaleboat is built lapstrake planks-on-frame.
Whaling tools in amazing detail. 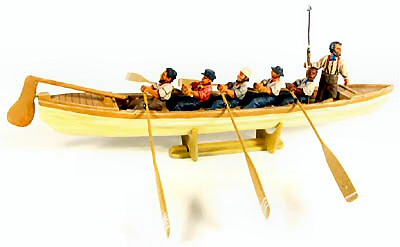 “Thar she blows!” The hard men of the sea take to their boats in pursuit of the gentle giants of the ocean.

Nautical dioramas, This whale boat is completely outfitted with whaling tools of exceptional detail, including harpoons, hooks, daggers, flensing knives, gaffs, etc. The hull is crafted of individual ivory “planks”. This is a six-man, single mast whaleboat. It would have been one of four carried on a whaling ship. Its crew would have included a coxswain, four rowers, and a harpooner up front. The model has been mounted in a fine mahogany and brass case. Boat measures 10 and one quarter inches long by 2 and three quarters inches wide by 2 and one quarter inches high. Case / Mount: 13 and one half inches long by 6 and one half inches wide by 5 and three quarter inches high.

photos and text courtesy One Of A Kind Antiques

While we’re waiting for the whaleboat builds to begin I thought it might be nice to look at some whaleboats. I didn’t find a lot to show on the internet, but I did find lots of material relating to models of whaleboats, apparently in far greater abundance than the real thing. Not surprising given that your average whaleboat had a life expectancy of about three years. Lightly built and put to hard use, the boats were soon discarded and replaced. Which no doubt kept their builders happy. Wendy Byar actually spurred me into action when she put a post on FB of a model. I had been looking at them, but then it clicked.
N Roger Cole built the model at the top of the post. He’s a meticulous craftsman based in the UK and does his research. I believe his model is built to the same plans that our boats will be. There’s an extensive bio on him here. For the other models I have supplied what information was available. Hope this will serve as an appetizer prior to getting to the main course.