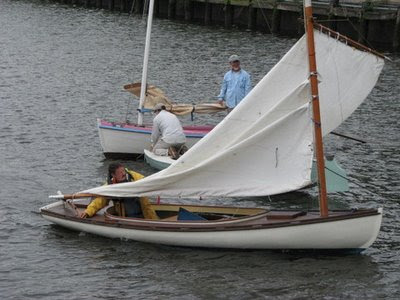 Mike Wick’s Melonseed, aptly named Pepita, scandalising sail at the basin of the ISM, during the 2009 Wooden Boat Festival in Philly 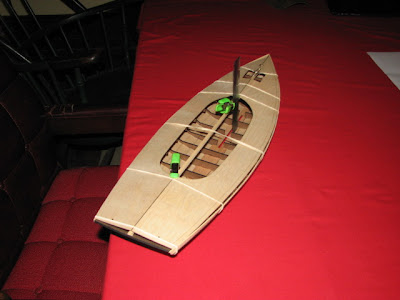 Mike is building another Melonseed, this one with some design modifications he wanted to implement after his experieince with Pepita. 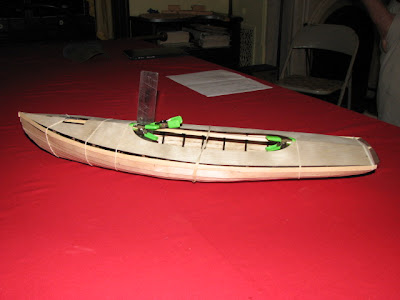 Mike is introducing camber to the deck, visible here in the model, hoping to achieve a drier sail. 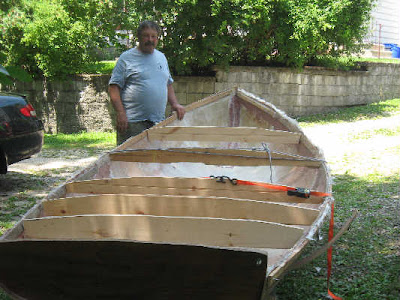 The new boat is a Cortez Melonseed, I think drawn by Roger Allen of the Florida Maritime Museum at Cortez, FL, with the hull built from a kit by the FMM by Ted Cook. 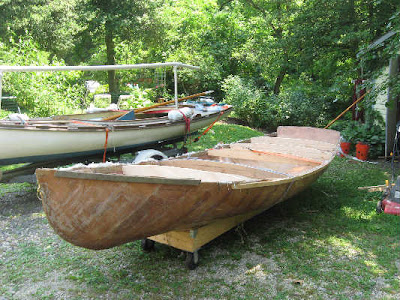 Mike is finishing the boat himself.
these photos courtesy John Guidera via Mike Wick 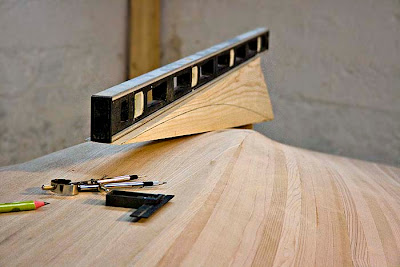 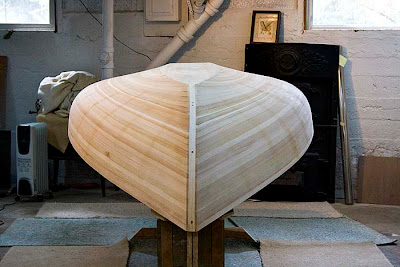 one of the completed hulls 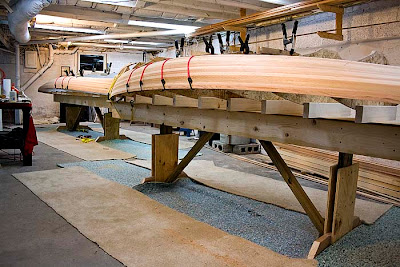 both boats half stripped 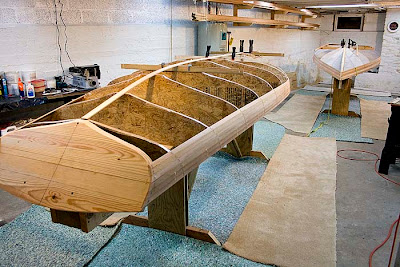 Set up, keelson, stem and transom in place, twelve strips on each boat 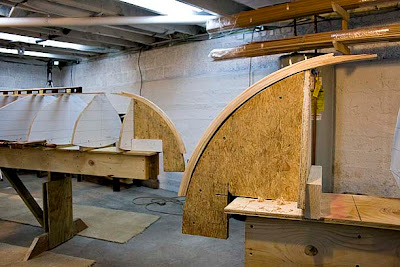 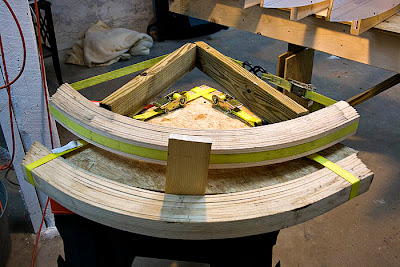 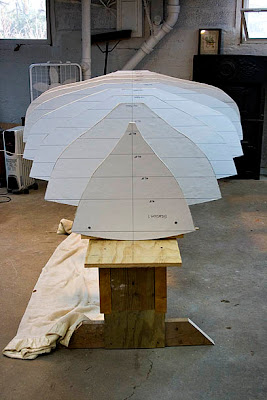 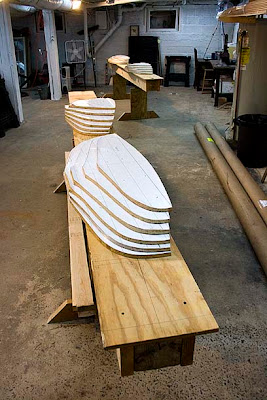 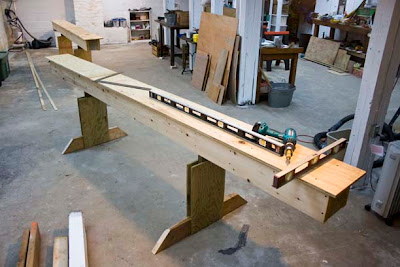 Setting up the strongbacks for the work to proceed upon. 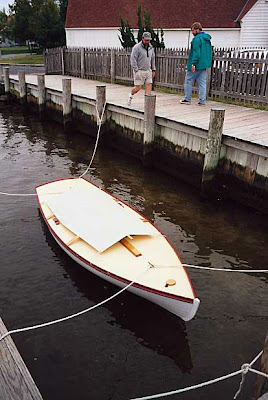 Barry first saw a Melonseed in an historic photo, and the boat grabbed his imagination, but it wasn’t until years later that he saw this boat in MD and began his research in earnest. A year later he’d finally identified the Melonseed.
all photos in this segment courtesy Barry Long

Melonseeds evolved in the Mid Atlantic region and there’s been a revival of interest in these boats in recent years. Howard Chapelle wrote about and surveyed these boats and they are included in American Small Sailing Craft, the bible for those interested in traditional American small craft. Although this revival is mainly centered in the home waters of this boat type, the popularity of the Melonseed has spread to other areas, the Midwest, the Deep South and the Northeast, at least.
Two friends of mine are currently building or finishing Melonseeds and I wanted to write about these elegant small sailboats. There’s a Melonseed Yahoo group and I wrote to them inviting members to submit their build photos and text, more of that later.
Mike Wick is a fellow member of the Delaware River TSCA group and is a Melonseed devotee. Mike is a prolific boatbuilder and collecter, and has a livery of around 13 boats. He recently sold his lovely Oughtred McGregor sailing canoe to a friend up in the Thousand Island area, in an attempt to lighten his load. He’s currently finishing out his second Melonseed. This one is to a design by Roger Allen, head of the Florida Maritime Museum in Cortez, Florida. Dubbed the Cortez Melonseed, an original strip planked hull was built by Mike Lucas, which he gave to Mike, who used it as a male mold for a cold molded hull, seen in the photos.That done, Mike pooped off his hull and passed it on to Roland Anderson who took over the original hull to build another melonseed. The model Mike is using to work out his deck modifications is a lazer-cut kit made by Ted Cook and are available from the Florida Maritime Museum. As seen in the photos of the model, above, Mike is making some modifications, mainly building in a camber to the deck to make his boat a drier sail. Mike’s other seed Pepita was designed by John Brady and built by Carl Weissenger, and is a gem of a small boat.

Barry Long set himself an ambitious project. The Virginia based graphic designer and photographer decided, after falling in love with the Melonseed, to build a brace of seeds, one for himself and one for his better half. He’s basically done that, but is still adding the finishing touches. He’s also chronicled his build on a weblog, which has to be the most detailed, erudite, well written and photographed build blog I have ever encountered. Build blogs can get a little dry, but not so with Barry’s, which is interspersed with amusing and enlightening asides, a host of informative comments from his followers and witty, introspective, informative and insightful commentary on the building process. Not to be missed! Barry seems to be completing the dual project and I’ve pushed him to get the pair done for the October MASCF in St, Michaels this year, owing to my completely selfish desire to sail one, or both of his sprouts this Autumn. I anyone reading this can make this annual celebration, I highly recommend you do so! Also, Barry’s photos here will be best read from he bottom up. There are tons more photos at Barry’s website.