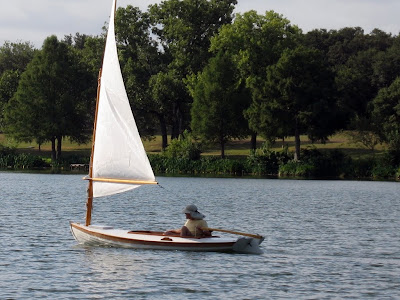 My first time out. Very stable, but shifting from one side of the cockpit to the other while seated on the bottom is not easy for this older body. Sitting on the side deck is a good option if there is some wind. I’m learning how to adjust the sprit (that goes from the mast to the top of the sail) and the downhaul to keep the crease in the sail (which is not very visible here) from happening. The boat can fit two, but it is tight if both sit in the cockpit. In practice the ‘crew’ can sit on the front deck facing aft with his/her feet in the cockpit, shifting side to side as needed to keep the helmsman from having to change positions at all when the wind stiffens. 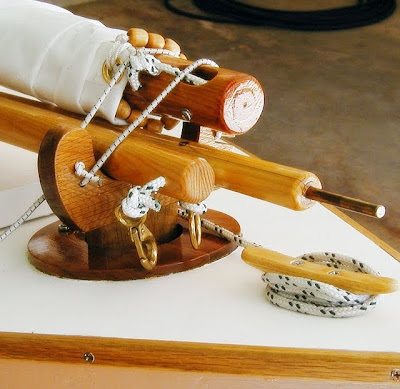 Forward spar support in use within mast hole 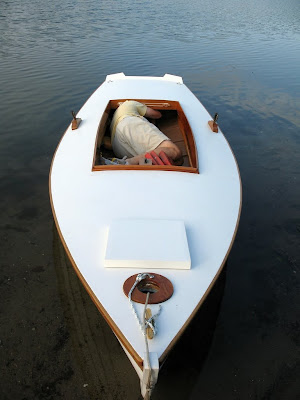 Hiding from the ducks

Actually this is me installing the cover to the rear hatch which is in the aft bulkhead. I added these to provide an air-filled flotation compartment aft ‘just in case.’ In practice this bulkhead is too far aft to be easily used, as is evident by the fact that I’m having to lie down just to fit the cover, which is held on (as is the forward hatch) from beneath via shock cord. While it is likely not fully watertight, it will sure slow down water entry if I capsize. Once I sailed the boat, I understand others who say that a capsize is unlikely, as she is very stable. 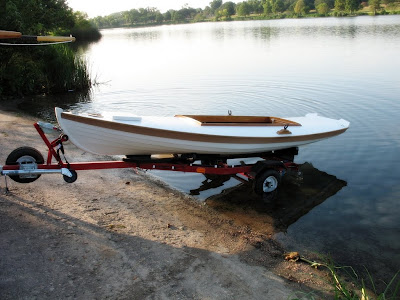 Going into the water at last. The cockpit coaming is cherry, with mahogany quarter round between it and the deck. In practice the square loomed Culler oars I already had and the height of the oarlock risers were not a good match, allowing the square part of the looms to scrape the top of the coaming when rowing. The solution was to make another set of oars with fully round looms and raise the oar lock risers by about an inch, which at present (Nov 09) is being done. 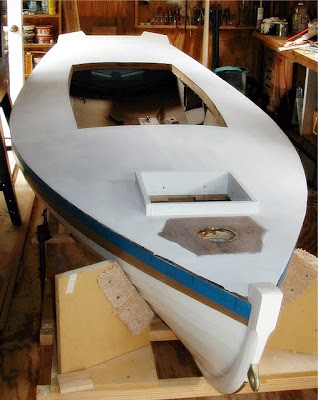 The ‘spoiler’ at the top of the transom is part of the decoy rail system that I opted not to install along the edge of the rest of the deck. This boat was originally used for duck hunting in the late 1800’s back east. The notch in the spoiler serves to keep the tiller from swinging too far in either direction. 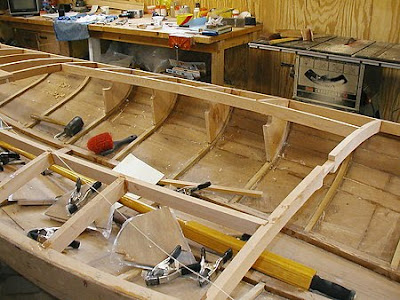 Cedar deck knees cut and fitted on the port side. Starboard side knees are in the foreground waiting to be installed. A temporary gusset on one side of each knee was used to hold the knee in place while the glue dried. Circular cutouts in the side of each knee are where the oar will sit. Attempts at steaming green ash knees were not successful — grain runout and too tight a bend. 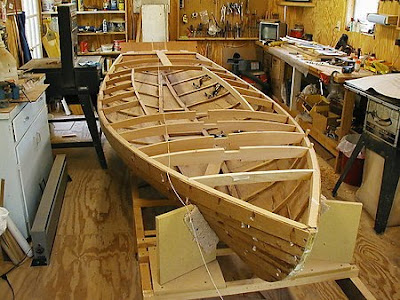 Deck beams and carlins in

Deck beams, carlins, etc. installed or ready to be glued in. Atlantic white cedar is a joy to work with. At this point I’d not yet decided to go with a centerboard. Doing so led to a need to modify some of the forward deck beams. Notice how the hull is supported by MDF scraps at the front, with carpet scraps between the hull and the MDF. A similar arrangement is used aft. The horizontal MDF pieces, which are screwed to the strongback, can be easily removed as needed. The flat bottom of the boat lets it rest easily on the strongback. 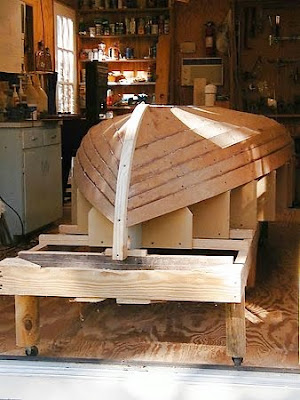 Here the outer stem sits where it will eventually be, but it was just placed there for appearance in this photo. After this was well set up, I removed alternate molds and cut extra wood from those that remained before turning the boat over with help from some rope, pulleys on the ceiling of the shop, and a few friends. Those 3/4″ MDF mods are very heavy. 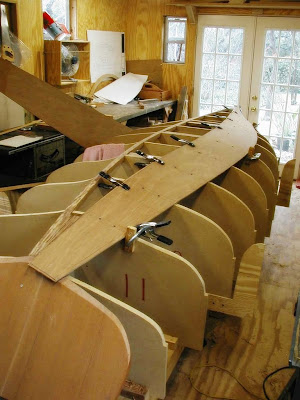 Trial fastening the first garboard. Chines are held down to molds via blocks screwed to the molds below the chines and screws upward through these to the chines. The chine beveling was slow, but molds needed minimal beveling for the garboard. Still, what mold beveling I did (for other strakes) was no fun! 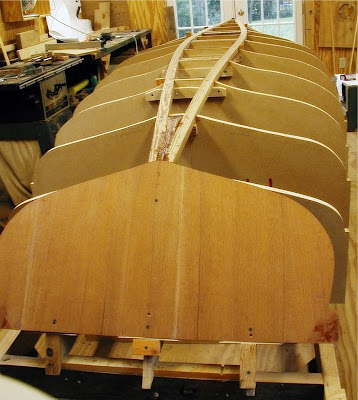 Transom forward — distortion caused by not shooting photo precisely – ideally the pieces of the transom should have been glued together horizontally, not vertically as I did. Keeping the aft end of the chines in place while the glue dried was rough — I came back into the shop an hour later and found that the two chines had popped upward (toward the ceiling of the shop) and thus were not still in contact with the stem. Some fast work with some screws through a block screwed to mold 12 fixed that. 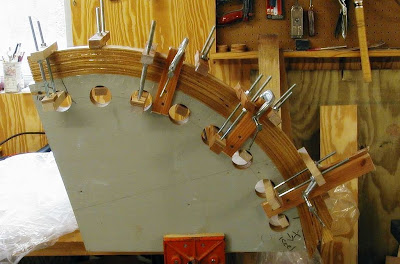 1) A messy job needing clamps of the right size and advance planning. Put waxed paper or plastic film or clear packing tape between the lamination and the clamps/mold to prevent sticking. Don’t make the laminations too thick. I think mine are no thicker than 1/8″. 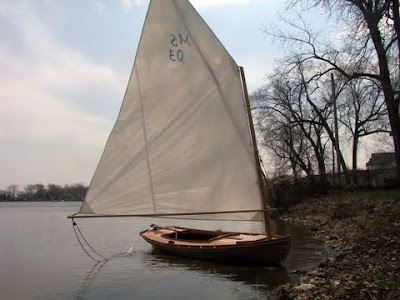 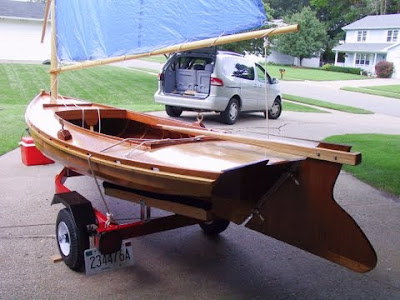 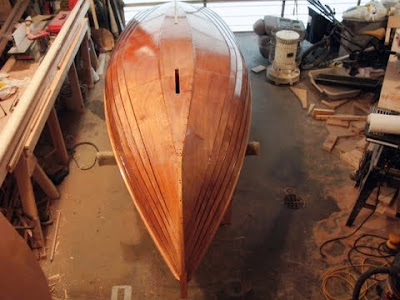 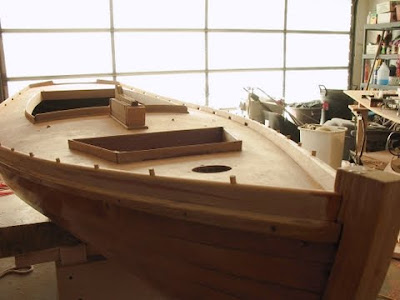 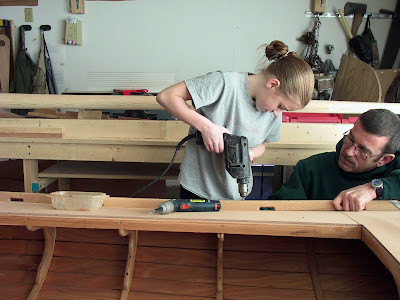 This really is a three or fore hand job. Pushing in, holding down, aligning and screwing all at the same time. Thanks Kay. 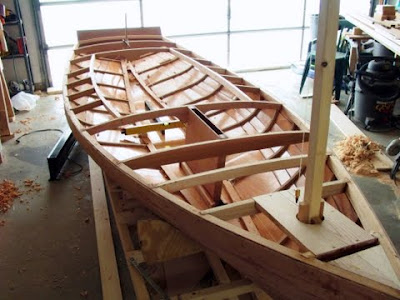 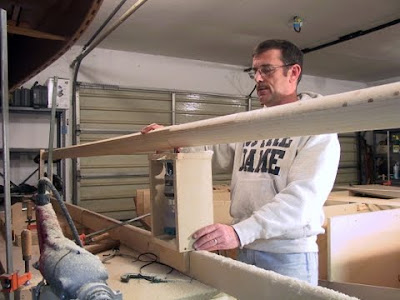 It goes slow but the results are good. 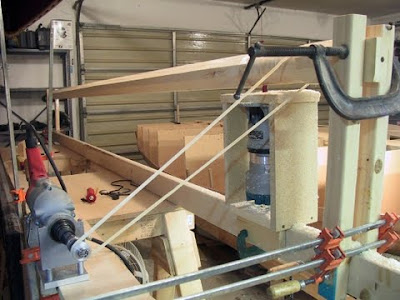 Here I’ve setup a rubber band driven 12′ lathe. The idea is that the router will slid along the straight edge on a sled while the mast turns. Holes are drilled for centers in each end of the mast.

First deck beam installed. The arch is 3″ per 25″ half side.

Each of these builders sent me links to their story after I’d requested it through the Yahoo Melonseed group. Each of these guys built beautiful boats, both to the Barto plans, I believe. Marc Barto drew detailed plans for the modern builder based on the Chapelle plans, but expanded from one page to ten, at least in the WoodenBoat version. Marc Cozzi started his project in 2002 and finished it in 2003. Stephan Lansdowne started his project in 2004 and finished in 2009. Marc has a nice website about his Melonseed, and a Rob Roy canoe he built as well as links to other melons here. Stephan Lansdowne set up his strongback in Oct 2004 and launched in August 2009. Steve doesn’t have a website, but his flickr photo set is so richly captioned that it is as informative as one. I believe Barry Long has communicated with Steve about his build experience. Thanks and cheers to both these fellows, for stepping forward and congratulations on their beautiful boats.