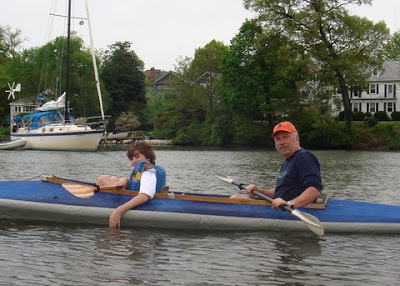 Chris and son Alec out in a folding kayak recently 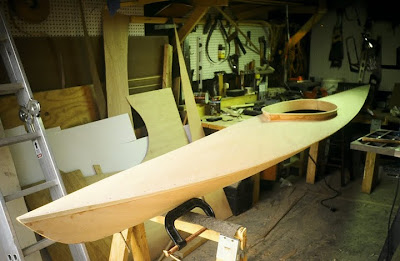 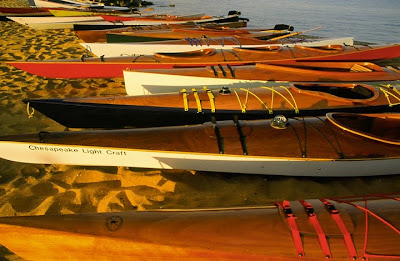 A host of CLC demo boats 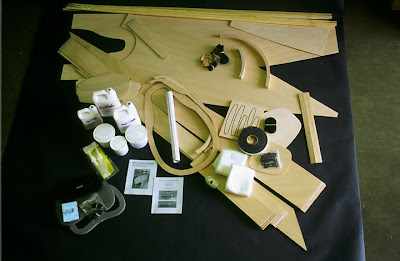 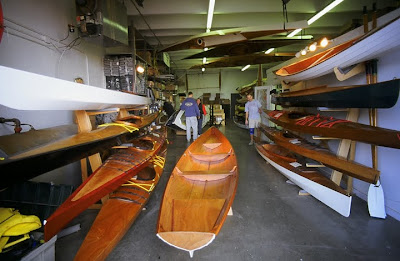 Showroom and warehouse at the CLC under Chris’ tenure 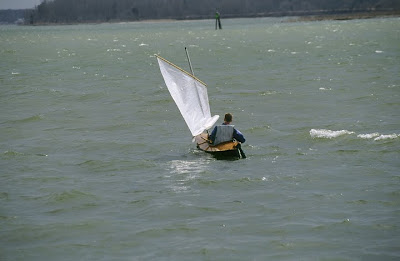 Mill Creek kayak with a reef in 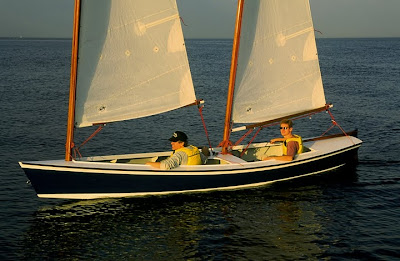 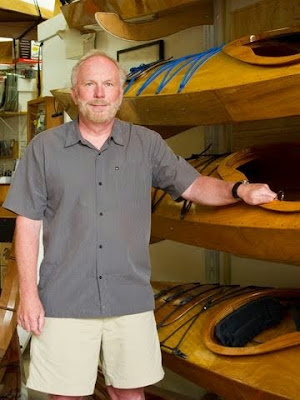 Most cyclists don’t race, yet they ride uncomfortable racing bikes and try to go too fast and so miss much of the world around them. Our emphasis is on a more relaxed and comfortable style of riding, and on refined bikes that are comfortable on a century ride, an inn-to-inn tour, or even on a ramble down your favorite dirt road.

For many years some of the wonderful parts and accessories once produced by small firms in Europe for the cyclo-tourist and randonneur have been unavailable, or outrageously expensive. So I started Velo Orange to find and sell these remaining items, and to produce those that were no longer available.

Happy riding,
Chris
Founder & President (from the introduction to the Velo ORANGE website) 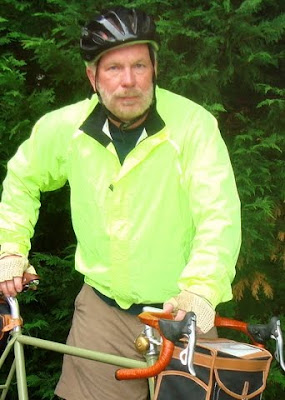 Chris with his VO Passhunter. VO no longer offers this frame, but I’m not sure why, seems an exceedingly nice design. See here an early post from Chris on Pass Hunting
and here the consideration for such a bike, which as eventually acted on. 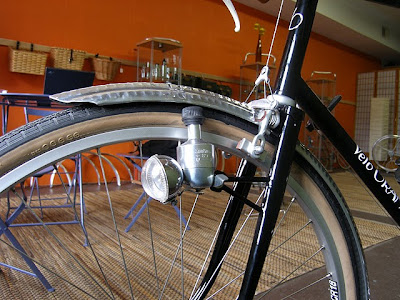 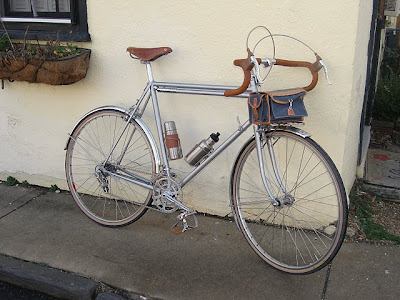 One of the VO frames, but I’m not sure which 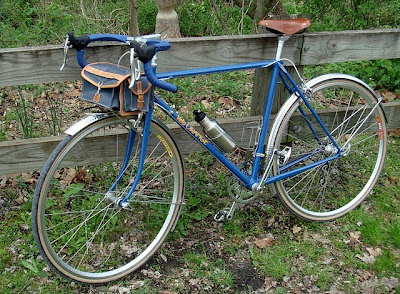 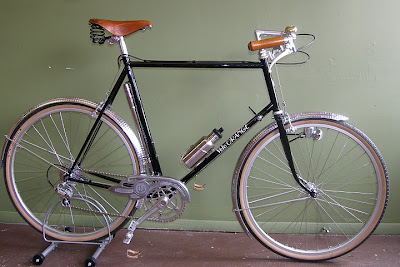 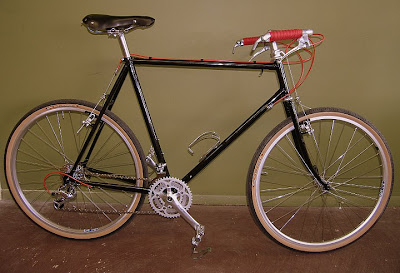 One of Chris’ favorites 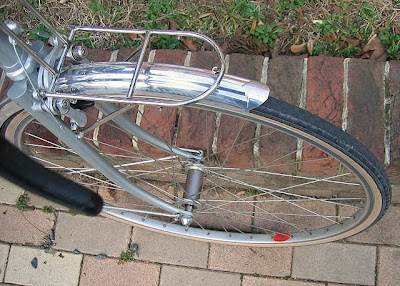 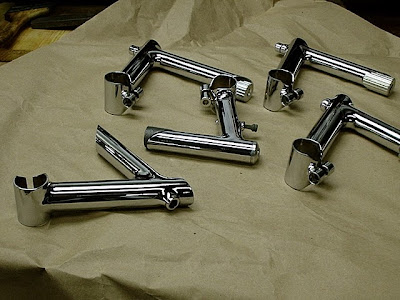 An array of quill stems, I am particularly interested in the center one 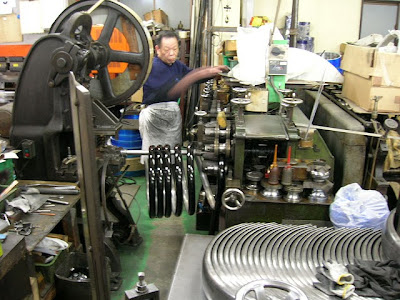 Fender production at the renowned Honjo in Japan. VO offers Honjo fenders as well as their own.

Chris Kulczycki is another rather interesting figure involved very deeply in both bikes and boats. Formerly an engineer, his genius is entrepreneurial. He has created out of whole cloth two rather successful companies, Cheapeake Light Craft, a supplier of wooden boat kits for homebuilders, and his latest venture, Velo Orange, a supplier of bicycle frames and components inspired by the glory days of the French Constructeur.

I have been aware of Chesapeake Light Craft for decades and met John C Harris, the current owner, last summer at the WoodenBoat show at Mystic Seaport, and had been trying to find the time to get to Annapolis for an interview and some photos.

Completely unrelated to that, I have recently been building a bicycle from the ground up. while doing research to find components for my new bike, I ran across Velo ORANGE and was pleasantly surprised to find them offering just the kind of components and accessories I needed to kit out my bicycle in the way I envisioned, and at reasonable prices. I was delighted and already purchased a crankset and other items from VO. I have been even more delighted to learn that the owner and creator of VO is also the originator of CLC! A flurry of emails ensued, culminating in this interview:

What was the genesis of CLC, how and why did that happen?

CLC was an accidental company. I was working in civil engineering, but had been moonlighting as a freelance writer for various boating and woodworking magazines. I wrote an article for Sea Kayaker Magazine about a kayak I’d designed and built for myself. And I offered plans for sale, thinking I might sell a dozen or so. The weekend the issue came out I was crewing on sailboat going from Chesapeake Bay to New England. I called my wife when we arrived and she said that 11 orders for plans arrived over the four days we were sailing. Maybe there was a real business in this?

A friend who had recently opened a small marine woodworking business in Annapolis offered to make kits for the kayaks. We outgrew his shop in 6 months. Another acquaintance had a larger shop and we outgrew that shop in about as many months.

John Harris, who had worked at that second shop, suggested that I hire him and simply open my own manufacturing facility. So I did. CLC grew and grew. Soon my wife quit her job to join the company and we hired several more employees.

Why the transition to Velo?

I sold CLC and we retired for about six years. I was, frankly, burned out. We traveled, sailed, cycle-toured and enjoyed time spent with our young son. Eventually I got a bit bored and decided to start a little company to sell some of the cycling components and accessories I liked, but were very hard to find in the USA. The plan was to have a little part-time business. I guess I got carried away because now, 5 year later, we have hundreds of our own products and sell to over 400 shops and custom builders in a dozen countries, as well as through our own e-store. We’ve outgrown our offices and warehouse twice and today have a staff of 11.

Any inspiration from Rivendell?

Not really. I knew that Rivendell existed and even considered getting a Riv frame once. But the fancy lugs, two-tone paint, tweedy aesthetic are just not my style. Most of the bikes I’ve owned have been French, or French-inspired like my Ebisu. So that’s the sort of bikes I was drawn to. The French custom builders, or constructeurs, developed the most comfortable and advanced randonneuring and light-touring bikes of all time, and that’s what inspires VO

Are you still sailing, paddling, riding?

We sold our big boat a few years ago, though we still have a Dyer “Daysailer.” I only go paddling occasionally. I often enjoy cycling, particularly long leisurely rides in the countryside. And I’m flailing away at becoming a competent longboard surfer.

Your business trajectory brings to mind Yvon Chouinard. Any influence there?

My main sport from the age of 16 into my late 20s was climbing, rock, big wall, ice, alpine. So I first heard of Yvon as a climber, even met him a couple of times. I also used his pitons, nuts, ice axes, and other climbing gear. Even today at least half the clothes in my closet have Patagonia labels. So, yes, I’ve followed Great Pacific Iron Works and Patagonia for decades and been greatly influenced by them.

What are your feelings on the current CLC?

I like what they are doing. John Harris, the current owner, was the shop manager at CLC since the very beginning. He is a skilled builder, but more importantly a supremely talented designer. I like his new boats a lot and drop by the CLC shop every few weeks to see what’s new.

After two companies (three if you count VO Imports, our wholesale distribution company) I’d like to share some of the lessons I’ve learned with entrepreneurs in emerging economies. An organization like SCORE, but in developing countries, might be of use.

I really enjoy building companies and developing products, but running the day-to-day operations of a company is not something I find exciting. So I’ll eventually look into selling or merging VO with a bigger company. But for now we are still growing and having fun.

Orange seems very clean, spare and direct (to the point). How’d it get that way?

That is simply the style that we like. Our web designer, Kyle, deserves most of the credit for translating our desire for a simple, but elegant, aesthetic into HTML.

No, at least not in organized events. A few years ago we went touring in France and we realized that we most enjoyed riding no more than 50 miles or so a day. And we like to stop for a long lunch at a nice restaurant, and visit some of the art shops and harbors and vineyards we pass. It’s probably a sign of impending old age. So I stopped doing organized rides, save for the occasional local charity event.

What do you ride, sail, paddle?

I most often ride a custom VO Pass Hunter built by Ahren Rodgers, though I also have access to various VO prototype and production bikes. As for sailing, we have the Dyer “Daysailer”, but are considering buying another cruising boat. We also enjoy our two Klepper folding kayaks.

What did you learn during the CLC years that carried over to Velo Orange?

We learned that it was crucial to communicate with our customers and to be sure that information flows both ways. We learn a lot from the folks who use our products, often making improvements and developing new products based on their suggestions and observations. At VO this has become very easy with the blog.

Another valuable lesson is to hire the best employees; try to hire people that are smarter and more talented than you are.

And we learned to continually improve our products. It drives the factories that make our components batty, but almost every production run has some tiny improvement.

Whats your take on the symbiosis between cycling and sailing?

I’m not sure I know, but here are two observations. First, traveling relatively slowly in a pleasant environment is what I most enjoy, be it in a boat, on cross-country skis, on a bike, or on foot. That is the way that the countryside or the ocean are best appreciated.

A special part of cycling is the rhythmic effort, not only pedals spinning, but enjoying how your effort is in tune with the terrain. It’s also low-stress exercise that, with time, becomes almost like meditation. Cross country skiing and sliding-seat rowing are the only other sports where I experience this as fully. Sailing also has a certain rhythm, but it’s quite different.

VO and especially Grand Cru, and the CLC boats belie a sensitive, developed aesthetic. Where did that come from?

It’s important to study the masters that came before you. Study the best effort of great boat designers or bicycle designers and try to incorporate the lessons you learn. I don’t mean copying technical details, but rather trying to emulate the beauty in their designs. I’ve long believed that, all else being equal, the prettier boat will sail better. Perhaps it’s only because her crew appreciates her and tries harder. A similar lesson probably applies to bicycles.

At CLC and at VO we spend a lot of time, an awful lot of time, considering not only if something works as it should, but also if it looks right.

Thanks to Chris for this interview:

and a generous offering of photos via PicasaWeb

Stay tuned for an interview with John C Harris.