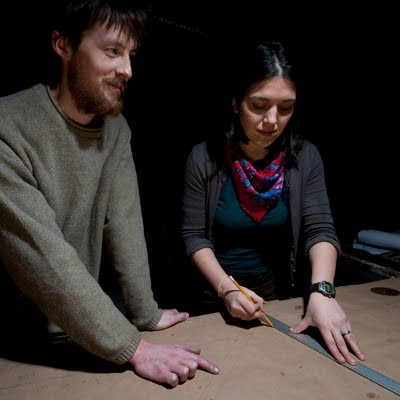 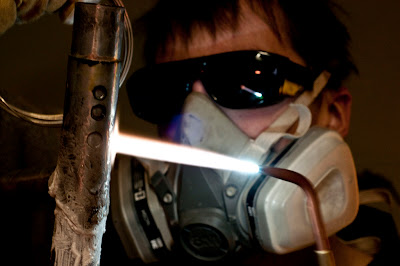 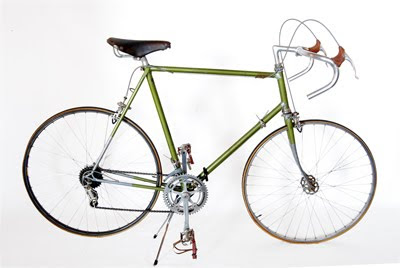 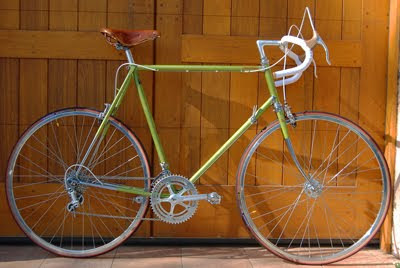 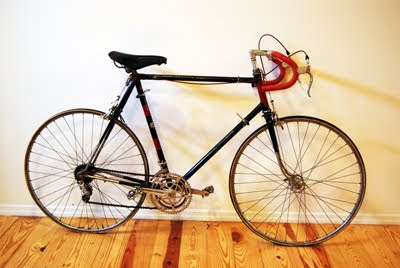 The second restoration was a 1972 Motobecane Le Champion
(old) 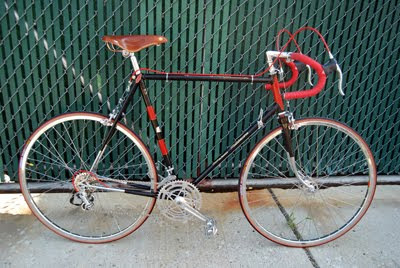 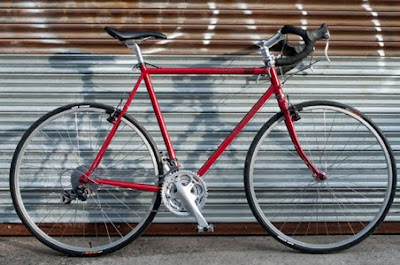 Though Folk Engineered is primarily a custom shop, in 2010 they brought out an all rounder production bike.
The Marsupial,
a practical and adaptive sport touring bicycle for daily commuting, pleasure road riding, light touring, and adventure. 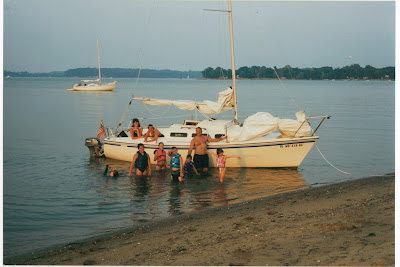 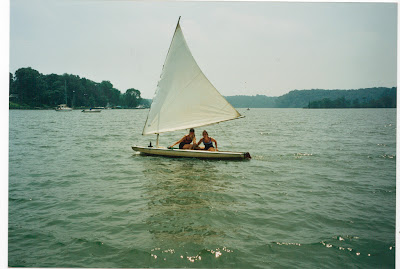 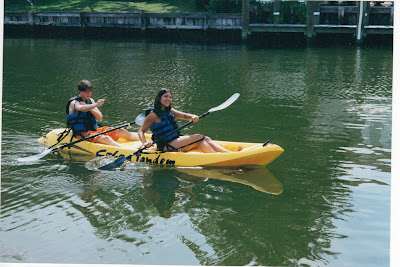 Some photos of Marie’s life in boats 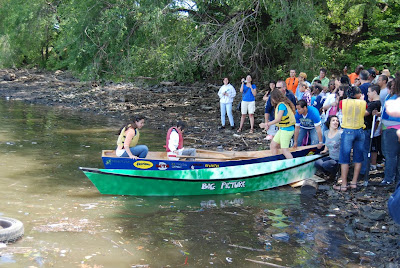 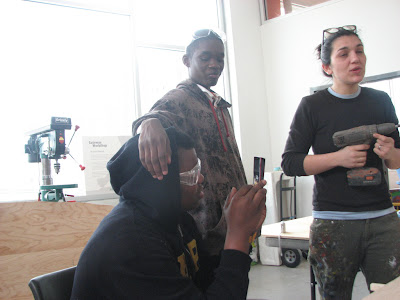 Some of Marie’s students 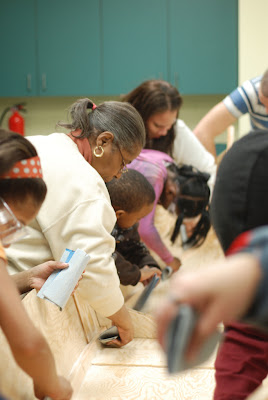 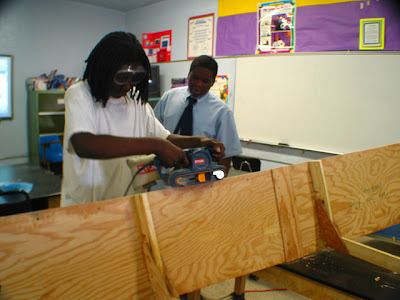 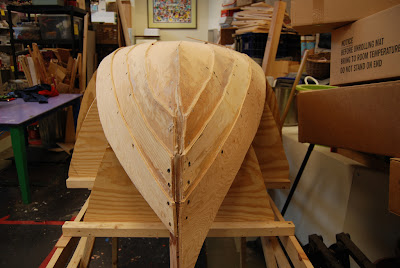 Here’s an interesting couple. They have a bikebuilding business together and Marie teaches boatbuilding to kids. I first learned of this duo when Marie left a comment on my second boats and bikes post on Chris Kulczycki. Through a series of emails and facebook interactions a picture began to emerge of a rather dynamic pair. Ryan Reedell and Marie Pasquariello are Folk Engineerded Bicycles. Marie has been sailing and boating since childhood, and was kind enough to respond to some questions I posed on the business, her involvement in the boat programs and a rather romantic story about her and Ryan’s relationship. I’ll let her tell the story:

First, I’d like to hear a bit about your family boating experiences.

“As I told you, my grandparents had a beach house at LBI, and every summer I got to spend time by the water. We had a Sunfish, and my mom taught me to sail on that. It’s the same Sunfish that my mom learned to sail on. The Sunfish was purely for adventure, and I loved sailing in the bay. My Grandad also had a small pontoon boat. The whole family (me, my 3 siblings, mom, dad, grandparents, aunts, uncles, cousins, etc) would pile in and go gunk holing. We’d explore inlets. And, of course, we’d stop to find some food. Some days, this was crabbing. We were low tech crabbers, using string, a hook, and some fish carcasses. And, some days, we’d hop in and dig our feet in the gunk looking for clams. Either way, we’d usually come home with some shellfish.
When I got into my teens, my grandparents were diagnosed with cancer. Within a couple years, their beach house was sold. The Sunfish made its way to my home town, and I’d take it sailing solo in a lake nearby. I don’t know where the pontoon boat went, but my uncles all got modern 20-25′ fiberglass sailboats and took up the tradition of taking us gunk holing each summer by their homes. My Uncle John has a house in Maryland on the Chesapeake, my Uncle Bill is in Maryland as well, and my Uncle John has a beach house in Brick Township.”

I’d also like to hear a bit more about the semester of cycling, how it led to romance and marriage and the job at the bike library, which I am assuming is a community cycling resource similar to Neighborhood Bike Works in Philly.

I’d like to hear about your husbands arc with cycling and the establishing of Folk Engineered and have you speak also to your involvement with the Co.

“I lot of Ryan’s story is included above. But, you may like to know that Ryan was a track runner in high school. He’s just naturally athletic. Thus, riding bikes.. and riding them fast.. is just a natural pleasure for him. Also, Ryan went to art school and studied printmaking… unrelated to anything he does now.
When FE started, Ryan and I shared all tasks, planning, designing, building, finances, etc. We did everything together. But, as FE grew, we had to specialize. Now, Ryan definitely leads the tool and fabrication department. He manages the shop. I definitely lead the communications and financial department. I manage the business. But, when it comes to bicycle engineering and vision, we work together… every bike is designed with both of our input. And, usually, both of us gets our hands on it in some way.
Also, the situation right now is that Ryan is able to work at FE full time. I work at Project U.S.E. and FE is my second full time job. For this reason, I don’t get to do much frame building currently. We hope, in the next year or so, I can also work for FE full time and build frames.”

What are the boats being built by Discovery 2011?

“We had 2 wonderful launches this year. All 6 boats floated with pride! The Discovery 2011 is a 10’2″ Acorn Dinghy designed by Iain Oughtred. It has a round hull and is made with traditional lapstrake construction (albeit with marine plywood, still a lot of planing). This is my first endeavor at lapstrake… as well as the students. It was built by the Discovery Charter School in Newark, NJ and this was their 3rd boat (the first was a canoe and the second was a Salt Bay Skiff). It is named the Spodoxy. The Spodoxy is a mythological name representing the superheros at Discovery Charter School – Epoxy Girl, Sawdust Girl, Duct Tape Girl, Metal X, Sharp X, the Manager, etc. Each Boatbuilder has specific superpowers. Together, they form the Spodoxy team. Their boat, the Spodoxy, leads them to their secret lair in the middle of the Atlantic Ocean. Oh, and it can also fly. As you can probably infer, the Boatbuilding room was full of imagination at Discovery this year.
The 2 other boat designs you see are the 6-hour Canoe and the Salt Bay Skiff.”

(Editors note: here is Marie’s description of the project from2008)

“I joined Project U.S.E.‘s boat building program this year. The Boat Building Project is a unique initiative by Project U.S.E. that is presented through a longterm, on-site relationship with participating schools and agencies. Students of middle- or high-school age explore the maritime history of their region and learn the science and art involved in boat building. The Project combines standard curricula, (math, physics, history, etc.) with rigorous and exciting experiential learning – a hallmark of Project U.S.E.’s programs. The Project culminates in the building and launching of wooden canoes or sailboats constructed by the students.”

Where are you guys headed?

“FE plans to continue the tradition of custom bicycle building, because we believe it’s our way to push the bicycle design industry. Our most challenging custom design of the year is the Oregon Manifest, designing the ultimate utility bicycle with 4th-8th grade students from a Newark charter school. This year, we came out with our first production bicycle, the Marsupial, a sport touring bike. We plan to do more manufacturing in the future, bring the tradition back to the US, and create jobs in the bike industry.
As for Project U.S.E., I’d love for the Boatbuilding Program to expand to have a Boat House facility. It would not only house our workshop but also be home base for on-water programs (paddling, navigation, community boating, etc). I am also working toï¿½start a job training / re-entry program in bicycle mechanics and frame building.
In our personal lives, we’d like to be happy, healthy, and one day have a farm (near a waterway of course) with chickens and children.
I mean, inevitably, bikes and boats will always be a part of my life, whether with FE or Project U.S.E. or nothing.”

I hope you’ll enjoy this story as much as I did.