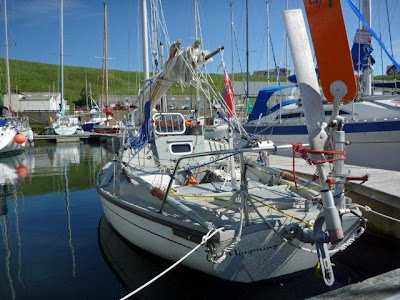 At Whitehills harbour prior to leaving 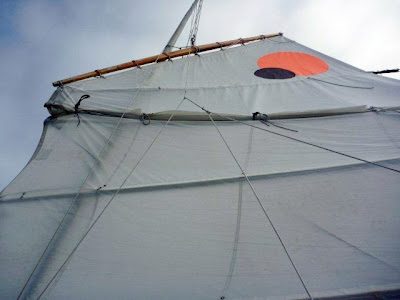 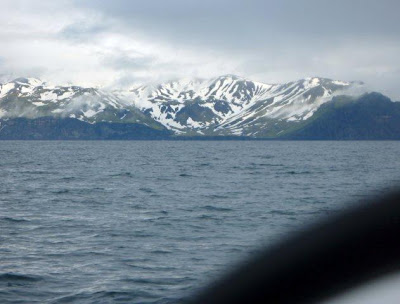 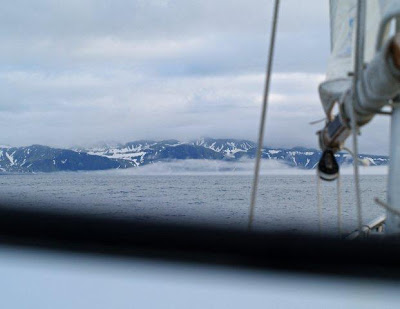 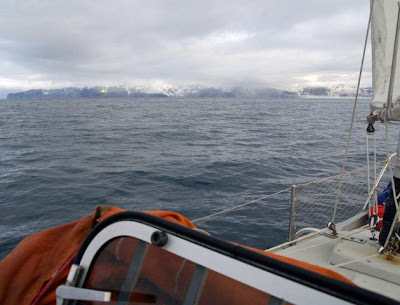 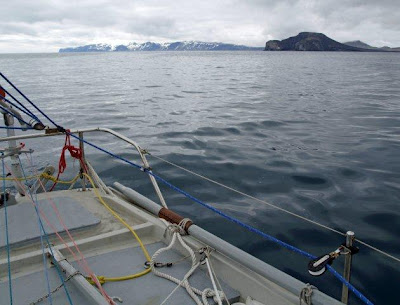 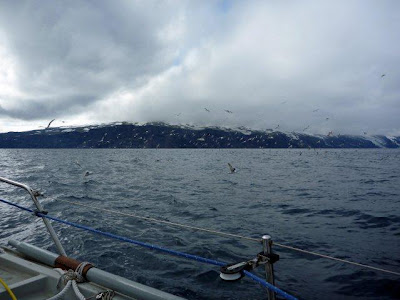 Fulmars at the base of Mt Beerenberg 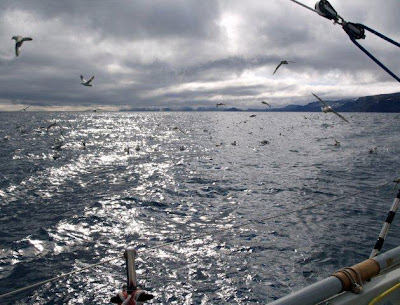 Looking back along the east coast of Jan Mayen 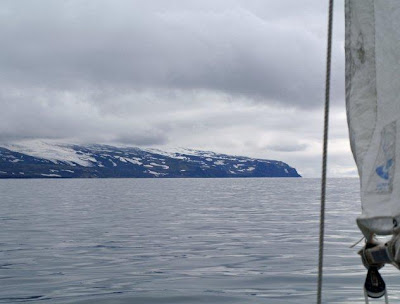 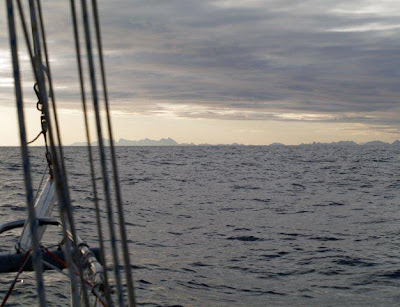 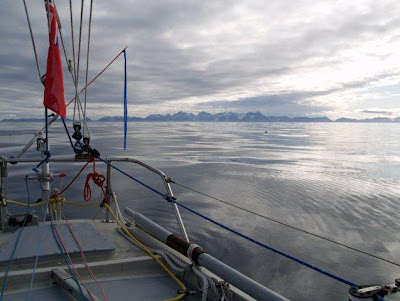 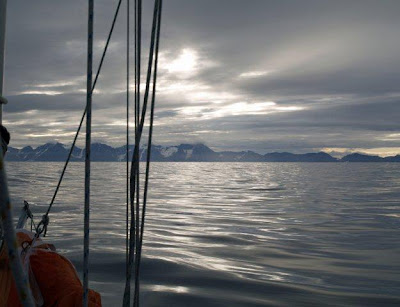 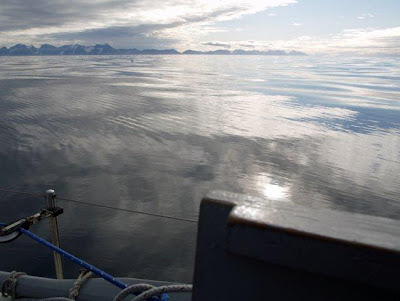 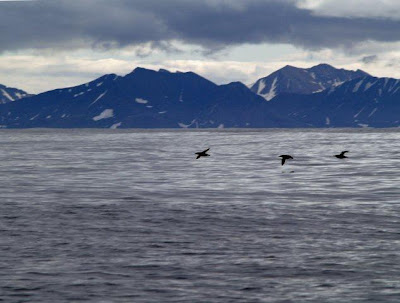 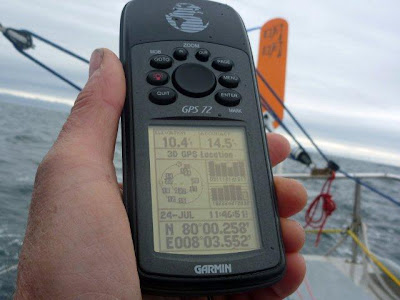 The mother of all noon positions 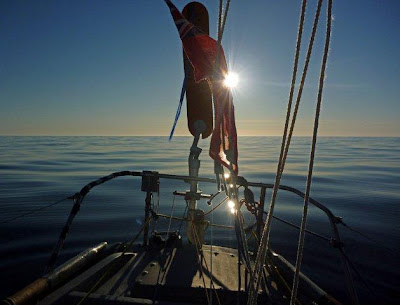 2AM calm in the high Arctic 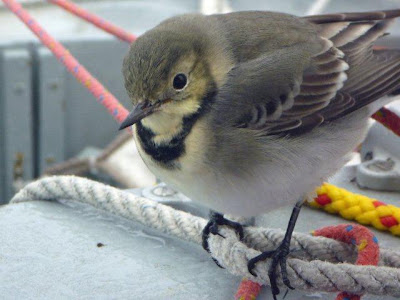 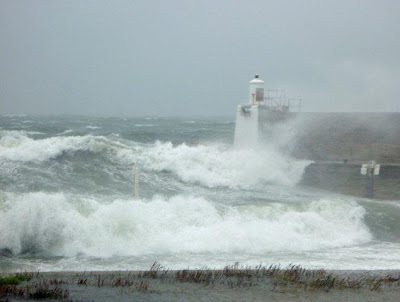 The entrance to Whitehills Harbour 24 hours after our arrival

Roger Taylor aka The Simple Sailor and his lovely little Mingming have returned from yet another summer cruise. This year Roger acheived a long standing goal, reaching a position of 80° North. Bear in mind as you read Roger’s comments below that Mingming is a 21′ Coribee with bilge keels and a junk rig. She has been heavily modified by Roger for singlehand sailing.
Here’s Roger’s synopsis of the voyage:


Left Whitehills harbour on the Moray Firth at 1700H on Thursday 23rd June. Sailed north through the Fair Isle Channel, heading first for Jan Mayen. We crossed the Arctic Circle a week later. A few hours after crossing into the Arctic the stitching in two seams on the third panel started to fail, no doubt as a result of chafe against the topping lifts. One of the seams was in a very difficult position to repair so I dispensed with that panel entirely, lashing two battens together. We had covered c.550 nautical miles at the time and so sailed the remainder of the 3000 mile voyage minus one panel. This probably
disadvantaged us a little in the extremely light airs we were to encounter further north.
We met our first period of very calm weather about 80 miles south of Jan Mayen, with six days of virtually no wind. On Monday July 4th, just after midday, 65 miles south-south-east of the South Cape of Jan Mayen, a yacht, motor sailing, overtook us about a mile on our starboard beam. We reached Jan Mayen on July 7th, after two weeks at sea. As last time, had a fantastic day sailing up the east coast. I had a proper chart of the island this time, so was able to go in a lot closer. Unfortunately Mt Beerenberg, the 7000’ volcano, was once again under cloud cover, so I did not see the summit.
Headed north-east from Jan Mayen, bound for Spitsbergen. Two days later a northerly gale knocked us down quite badly. I was in my bunk at the time and felt the mast go way beyond the horizontal. A lot of chaos inside, but the only damage was bent framing on the spray hood.
We made our landfall at Spitsbergen, at Prinz Karls Forland on the
north-west coast, on Wednesday 20th July, after 26 days at sea. Sailed north up the coast, making sure to keep beyond the 12-mile limit (the regulations for yachts sailing in Svalbard waters are draconian).
Fantastic views of the Spitsbergen mountains, stretching to Albert 1 Land in the north. At one point I counted 73 peaks. Several times encountered relatively (for these days) large concentrations of whales along the continental shelf, mainly fin, with some humpback, minke and at least one sei whale. This surfaced very close and I was able to identify it from the photos I took.
I carried on north, hoping for the right wind to make a dart for 80°N. Had to be careful here, as there would have been ice to the west and north, and land and ice to the east: a potentially awkward trap. After some concernwith a hard blow from the south-west, the wind settled at west-north-west, giving me the perfect angle to sail quickly north, then south again.
Reached 80°N at midday on Sunday July 24th, after just less than 31 days at sea and nearly 1600 miles of sailing. Turned immediately south and began the long haul home. I had intended to sail a westerly route, using the East Greenland current, and giving us another look at Jan Mayen. However a week of south-westerly headwind out paid to that, forcing me to sail the direct route home, and putting us into the north-going North Atlantic current. Eleven days of strong northerlies helped break the back of the return leg, bringing us to within striking distance of Viking. The weather turned very sour, with a constant mix of calms and headwinds. As we approached the Shetlands the weather systems became increasingly unstable, with depressions springing up all round and following unusual tracks. Finally got to within 20-30 miles of Whitehills and were once more becalmed. I was very concerned,
as the forecast was for extremely strong northerly winds – not what you want when approaching the south coast of the Moray Firth. A fortuitous mix of a light easterly followed by a moderate north-westerly enabled us to cover the last few miles and get safely into harbour before the storm struck. Within less than a day of tying up in Whitehills it was blowing Force 9 to 10 straight onshore.
The voyage took 65 days (31 days out, 34 days back) and we logged just over 3000 nautical miles. This was an interesting contrast to last year’s voyage to west Greenland, in which we covered over 4000 miles in about the same time. Mingming has now sailed nearly 20,000 miles in six years, mainly in high latitudes. I am now thinking seriously about giving her a well-earned rest!

Congratlations to Roger and Mingming on another fantastic voyage, a great achievement.